Personally I don’t understand why people clone readily available beers, other then to compare them to make sure you know what you’re doing. My opinions on cloning beer consist of
I have cloned a beer before, Breakfast stout, but I can’t buy it in Texas. I do enjoy the act of formulating a recipe for a clone. I enjoy having to research the beer, especially if I have not had it before, and trying to determine the ingredients based off of other people’s reviews.

This beer was a beer that my father wanted to clone. So I told him that I would help him with the recipe. To formulate this recipe I read reviews on BeerAdvocate and researched the brewery to determine, yeast and regional hops/malt. The reviews gave me an idea of what characteristics that I should be targeting aroma, flavor, and mouthfeel. The result is below 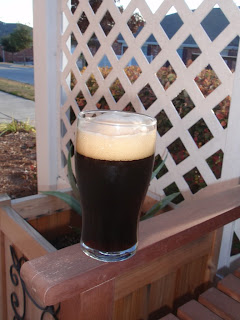 Appearance: Hazy dark brown with reddish hues and a fluffy off white head that lingers and leaves a thin lacing over the top of the beer. I preferred the appearance of my beer compared to the commercial example, although the clarity was better on Fuller’s.

Aroma: Roasted grains, bready notes, toffee, and a hint of chocolate. Classic porter aroma, pleasing but not particularly complex. This was the biggest difference between the clone and Fuller’s. Their beer was very fruity and lacked the roasted notes that I was expecting.

Taste: Toasted bread, a touch of chocolate and coffee with roasted grains rounding it out. This was pretty similar to the commercial example, although, again their beer had more fruit elements.

Mouthfeel: Medium body with clean finish and way over carbonated. I’m still not sure what happened exactly. Either my father used too much sugar or the beer is infected. The beer sat in primary for 3 weeks before it was bottled. I know I gave him a reasonable amount of priming sugar, in fact I know it was a little lower then what was suggested, because I don’t like highly carbonated beers. The other explanation is an infection. My Dad buys a lot of his equipment off of craigslist. The problem with this is that you don’t know the condition that the gear was stored and you don’t know if the person you’re buying it from was using Brett. I still have two bottles left and will hold on to them to see if any signs of an infection show.

Overall: Other then the fruity aroma and flavor and the carbonation issue, the beers were remarkably similar. I think I did a pretty good job since I had never had the beer before.  Since I don’t know what happened with the carbonation I can’t say what I would change. I’m also not sure why the Fuller’s was so fruity, my assumption was because of age and slight oxidation.
Posted by James at 8:48 AM