My first attempt to brew a beer for my part of the wedding favors is definitely infected. Hard to say where the infection came from since I’ve only brewed two beers on my new setup and each are sour. Only the first batch was intentionally sour, the second (wedding beer) was not supposed to be sour. I’ve narrowed it down to three areas that could have caused the infection. To date I have not had an infected batch that has resulted in a lost batch. Only one infection that I know of was infected and it was probably Brett-C in my Hoppy Hefeweizen, which was due to not having separate racking hoses at the time. The hefeweizen was designed to be consumed quickly so I didn’t really notice it until the end of its life. I also knew this was a potential problem but I didn’t have time to buy a separate hose so I just accepted the risk.

This go around I don’t have any clean batches to prove that it was from the Fantôme dregs and not my brewing system. If it is my brewing system I’m have narrowed it down to two potential locations. The hose that connects my keggle to the carboy for racking and the ball valve that connects the keggle to the hose are the points of concern. Luckily each is an easy fix. If it’s the hose I can just buy a new hose. If it’s the ball valve then I just need to spray sanitizer on it prior to racking form the keggle, which I have not done yet.
It’s been about a week since I brewed this beer and so far no sign of infections, so I’m assuming it was from the dregs. I used the exact same method, no spraying sanitizer on the ball valve (which I need to do anyways) and I didn’t replace the hose (which I should do anyways). As of last checked it was normal saison.

Our wedding theme has morphed in the last few weeks and is currently wildflowers in general. So since I have a chance to rebrew the wedding beer I figured I would incorporate this somehow. I decided to go with a combination of hibiscus and elderflowers. The hibiscus should give it that reddish color that I was looking for as well as a subtle tartness and cranberry flavor. The elderflowers I’m hopping will add floral notes and not the green pepper notes you get from a Cantillon Mamouche. 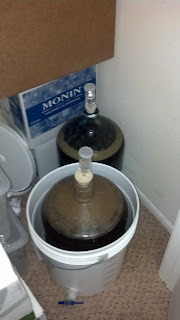 Notes:
(2/16/13): Brewed by myself. Easy brew day nothing thrilling. I did however accidently miscalculate my time and added my hops early. I added the hops at the 75 minute mark so I followed the schedule and just removed them early. I wasn’t using the Goldings for aroma so it shouldn’t be an issue. I also added 15 minutes of boiling to hit my target volume. Half way through the boil I made the candi sugar. I used a table spoon of yeast nutrient to convert the sucrose. I added the candi sugar straight to the boil. The gravity measured at 1.048.

(3/11/13): Gravity down to 1.006. Bottled with 0.6 cups of table sugar. At bottling I steeped 2 ounces of Hibiscus in hot water in my coffee press for about 15 minutes. Then I added it during bottling. I had to split the batches in my bottling bucket, so I bottled roughly two separate 5 gallon batches. The Hibiscus added a nice tart cranberry like quality to the beer. It also added some redness I was looking for originally. I yielded 48 large format bottles and one small format bottle for testing. Now I just need to add labels and wax.