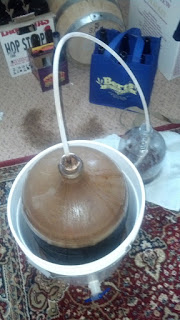 I was able recently to get a used barrel from Ranger Creek, Texas’ only brewstillary. They not only are a brewery but they also distal their own bourbon and other sprits. They were selling their spent barrels that originally held their bourbon and most recently held a smoked scotch.  To play on the smoked scotch I decided to add some rauch malt, even though I doubt a pound will really matter. I was under gravity, which is not surprising considering the limited space in my mash tun. I also probably should have added more water during mashing, it seemed a little thin. For this beer I decided to go traditional and brew an imperial stout, a favorite amongst beer nerds for barrel aging. I used the recipe that was originally provided by Todd Mott, the former brewer at Portsmith Brewing, for his beer Kate the Great. One of my homebrew compatriots brewed this beer for his wedding, which was going to be for wedding favors. He, however, deemed that it was not good enough to pass out because it was not up to his standards at the time. We ended up trying one a few months later and were blown away by its improvement. The recipe that I’m using was tweaked by the the Mad Fermentationist and then I added some Smoked Malt. I’ll probably only end up barrel aging it for about three weeks since the surface area to volume is so high in a 5 gallon barrel that I don’t want over exposure to the wood and over oxidation. After I empty the barrel I plan on adding an English style Barleywine.

Specs:
Grain Bill:
Hops:
Yeast:
Mash/Boil:
Notes:
(9/30) – Brewed mostly by myself some stirring help from John. As usual I didn’t have enough room in my kettle, really need to get those kegs from my Dad. Had to boil the other amount separately and then add it into the main boil. If I wasn’t worried about running out of propane I probably should have kept boiling to reduce the volume and increase the gravity. I was also worried that too little volume and I couldn’t fill the barrel. I ended up coming in way undergravity at 1.086 but no matter it should still end up being pretty bit. Still working on learning how to brew a high gravity beer without adding sugar.

Chilled to 70F and pitched the starter I made on Wednesday and topped up on Friday. Fermentation started in less than 12 hours, big blow off, which will eventually lead to me cleaning my carpet. Strong fermentation continuing for the next two days. I’ll give it 3 weeks on the yeast the rack it to the barrel and probably brew a barleywine the same day.

(10/17/12) - Racked beer to a carboy for additional bulk aging. It was a little boozy. The aroma was fantastic and the taste was a very good, just rough around the edges.