Ever since I brewed my first lager a few years ago, I’ve wanted to brew another; however, I don’t like tying up my kegerator/fermentation chamber to for extended periods of time. Since I was going to be in Iceland for a few days I decided to brew one of my favorite styles, a hoppy pilsner. Whenever I’m buying beer I usually buy things I don’t brew, more often than not its Firestone-Walker Pivo Pils (actually that was one of the beers I took with me to Iceland). 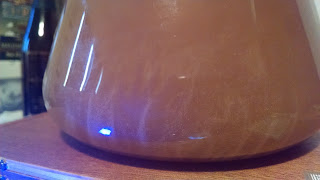 Lagers are not particularly difficult to brew, especially if you’re not doing any fancy mashing, they just require more temperature control. I have seen some exbeeriments with faster less traditional fermentation, which I plan on looking into in the future. For this beer I wanted to also test out the programing feature that my Black Box temperature controller has built into it. I thought it would be a good idea to learn to use it for future brewing endeavors while I’m away somewhere. The nice thing about a pilsner is that it has a pretty straight forward malt base and hopping schedule, because of this, I decided to brew 10 gallons and use half of it to top up my sour barrel.

I set the fermentation schedule that I have below in my notes. It started at 55F and went up over the next few days for a diacetyl rest, then back down for lagering. Luckily for me I correctly programmed the Black Box and it did all the work for me while I was away. If you have the chance to purchase a Black Box or are in the market for a temperature controller, I would highly recommend it.

Notes:
2/19/16 – Brewed by myself. Added 5 grams of CaCl and 0.5 grams of gypsum to the mash. Mash pH was 5.27 and my target was 5.28. Pre boil gravity measured at 1.044 and I collected 13 gallons. Added 10 ml of lactic acid to sparge water. Boil pH measured at 5.15.Wort chilled to 78F and oxygenated with pure O2 for 30 seconds, then placed in chest freezer for 4 hours to chill further. Yeast rehydrated and pitched after additional chilling. I programed my black box temperature controller for the first time since I was going to be in Iceland for the first week of fermentation. The initial temperature was set at 55F.