Every December, for the last 3 years, over my winter break from work I brew a psudo-lambic. My goal has been to build up a stock so that I could eventually blend my own “gueuze.” Obviously it’s not lambic or gueuze since I’m not in Belgium, use a turbid mash, and I don’t spontaneously ferment. I do, however, attempt to use a similar grain bill, aged hops, and bugs from commercial spontaneously fermented beers. I honestly had really low expectation for this since having a beer sit on its yeast cake for 3 years is a little disconcerting. 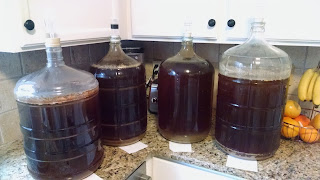 This year happened to 3 years since I started doing this, which means I now have enough beer to blend 3 years. I invited some friends over to assist with the blending. Prior to blending I measured the final gravity and pH of each beer. In addition to three years of the same beer I also included a separate saison that unintentionally soured and a clean saison. My goal was to come up with multiple blends on top of “gueuze.” The remarkable thing that I noticed was that the beers all had a very similar final gravity and pH, regardless of initial starting gravity, however, they all had varying levels of apparent acidity. 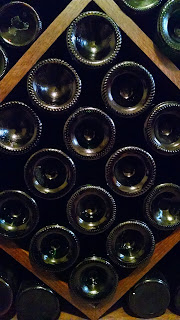 For the blending session I pulled about a pint of each beer and we began by tasting each component on its own and writing down tasting notes. I did not use a scale or measuring cup for doing the actual blending. We used my pipette as our approximate measurement and measured everything in parts. The first blend we worked on was the ‘gueuze,’ mostly because I figured it would be the most challenging. It was interesting to see what flavor and aroma components would become apparent when blended and what would disappear. The final blend we decided on was 2 parts #2, ½ part #3 and ½ part #4. I was happy to see that the best blend ended up being a combination of all three years of beer. #4 was the hardest beer to drink on its own; however, without that component in the final blend it lacked a rustic complexity. In my opinion, I feel that blending is the only way to get the levels of complexity of Gueuze. Souring beers contains many variables so the same wort, even from the same batch can and will probably end up tasting different. Blending allows you to pick and choose the components you want. 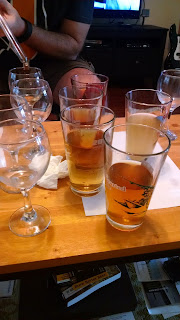 I blended about 4 gallons of “gueuze” and added priming sugar and champagne yeast. Traditionally, blenders will not add priming sugar or fresh yeast, but instead use the young lambic to provide fresh yeast and fermentable sugars for carbonation. Since I’m not making an exact gueuze, I don’t feel the need to adhere to traditional methods and wanted to guarantee that it will carbonate. After the first blend I still had beer plenty of beer left over. The following are the other blends (all blends are listing in parts):

All beers were primed with sugar and had champagne yeast added for carbonation, with exception of the raspberry beer because it was not bottled. For the white wine, I went with a New Zealand due to its tropical fruit nature. I blended it to taste at the time of bottling by pouring it into the bottling bucket and smelling it. I had about 1.5 gallons of beer number two at the end of everything so I decided it would be a good idea to add it to 3 ghost peppers. Time will tell if that was a good idea or not.