My kegs are empty, I’ve finally got a weekend with some time off and it’s starting to warm up. Time to brew a Saison. I’ve wanted to brew a Love Buzz “clone” ever since I tried the Anchorage Brewing beer. Embrace theFunk had an interview with Gabe Fletcher where he revealed a little bit about his process, as well as, a receipt for Love Buzz. Obviously I can’t stick to the whole receipt due to my lack of a pinot noir barrel, but I can substitute with pinot noir soaked oak cubes. I’m also deviating from the Brett-Brux and going with the Brett sample that I received from BKYeast. This Brett was isolated from a bottle of 2007 Cantillon Iris.

I decided to brew a 10 gallon batch since, as stated above, my kegs are empty, and the Brett portion will take a few months. The regular version will go straight into the keg after some dry hopping with more Citra hops. I found the recipe from Gabe interesting. If you ready it the portions of adjuncts that he adds are very small, just a few grams per batch. I’ve never added orange peel or pepper or rose hips for that matter before, so I’m honestly not sure how much I should add. I figure I’ll stick to what Gabe says and if I feel I need more I can always re brew. 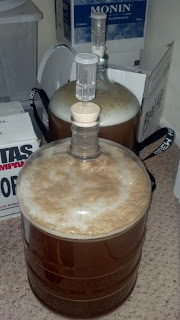 When I went to buy the grains and hops for this beer I forgot that the recipe on Embrace the Funk was in terms of percentages and that Hopville was bought out by Brewtoad. This meant that I couldn’t quickly come up with a recipe for exact amounts of grain or hops. So I had to wing it. I ended up buying 26lbs of Pils Malt and 2 lbs of C-60 and White wheat. Turns out I was only a few pounds off. I decided to brew a larger batch and adjust since I assumed I would be wildly under-efficient due to all of the grain in my small mash tun. I came in over my intended gravity and topped up with water.

As usual I tried a different method for my brewing process. I didn’t have access to the immersion coils that I usually have so I decided to use the jockey box that I recently acquired to cool the wort. I disconnected all of the parts of the jockey box for my keggerator and connected the two stainless steel coils with plastic tubing. To cool the beer I first racked it from my kettle into a sanitized corny keg. Then I pressurized the keg and pumped it through the jockey box and into my carboy. It worked pretty well but I didn’t, for some reason, account for the fact that I was taking wort that was probably around 180-190oF and trying to chill it to 70oF. That’s a lot of heat transfer! I know for next time to have more ice then I did. I had to constantly dump water from the jockey box and top it up with fresh water. On the plus side I’m pretty sure I did accomplish what I intended, which was to decrease the amount of water I use to cool my wort. Next time I now know to have more ice on hand. It didn’t chill the wort all the way down to pitching temperature, but it got it close, maybe down to 90oF, so I placed the carboys in to my keggerator to chill them the rest of the way, then I pitched my yeast. The benefit of my new cooling system was the aeration. This was probably by far the most aerated beer I’ve brewed to date, judging by the amount of foam created in the carboys. I didn’t get around to changing to the new hoses that I purchased, so if it ends up being infected due to the previous lines then it’s my own fault. I’m hoping it will be ok, the previous user swore by his cleaning practices and the lines were only slightly discolored. I also doubt that he was brewing and kegging wild beers.

Hopefully in 8-10 months I’ll have something that slightly resembles Love Buzz Saison.

Mash Schedule:
Single infusion at 151oF for 90 minutes

5/26/13 – Brewed by myself. Pretty standard brew day no surprises this time. It cool longer to cool then anticipated and I need more ice but other than that it was fine. Cooled to 70oF and pitched a double stepped up starter from the wedding saison yeast slurry. First I built up the starter, and then I made two separate starters and poured a small portion into each growler. The two growlers were pitched into the carboys. Fermented at 80 degrees.

5/27/13 – Fermentation took off after about 12 hours, nice white krausen about 2 inches thick with some light brown spots and hop material in it.

6/3/13 - I went to check on the beer and I noticed that the air lock had been knocked off and there was dark gray cat hair on the rubber bung. I think I know what happened here, hopefully it is not infected. I'll turn that half into the kegged half if it seems ok in a few weeks.

6/8/13 - Each air lock is still bubbling. Slowly but still bubbling. Hopefully they are not infected from my cooling method, I wouldn't be surprised though, only time will tell. Although there are a lot of factors that could cause the air lock to bubble besides infection.
6/12/13 - Took a taste test and decided it was time to add the dry hops to the kegged version. I added two ounces of Citra pellets straight into the carboy.

7/3/13 - First tasting. Good but has room for improvement. Excited to try the Brett version.

1/20/14 - Bottled with 1.9oz of priming sugar targeting 2.2 volumes of CO2. Finally got to try out my Champagne corker as well. The bottles look pretty awesome with corks in them.

3/4/14 - First tasting. From what I can remember it is pretty similar to the actual thing, with only minor differences.
Posted by James at 9:17 AM