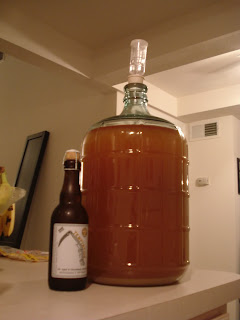 Kind of a slow day at work, plus it’s a Monday so I don’t feel like working. I don’t remember what the details I provided regarding my sour ale were so I figured I would post this since it technically is a different beer.  About two months ago I brewed a Saison using the recipe here. It was a 6 gallon batch that I fermented in primary together. Well after about 7 weeks the beer finally got down to a gravity that I was looking for and I proceeded to bottle half of it. I wanted to have a base to compare my oaked sour version. After I racked half of my beer (about 3 gallons) into my bottling bucket, I took the other half and racked it into my 3 gallon secondary carboy. Prior to brewing my Saison I took some Hungarian oak cubes (about .75 ounces) and boiled them for about 15 minutes to remove some of the tannins. The oak cubes were then placed in a mason jar with some Pinot Gris and left to soak until I was ready to split the batch. I believe the soaked for around 8 weeks, my notes should say. I wanted a used wine barrel feel from the oak cubes.

After I racked the Saison into the secondary carboy I made sure to siphon a little bit of the trub. Brett will eat autolyzed yeast, among other things. I took the oak cubes and placed them into a sanitized bag (paint strainer) and squeezed them through the opening. When I had the oak cubes in the carboy I opened the Russian River Temptation, provided by jwjon1, and slowly poured it into a glass. I left a little bit of beer remaining in the bottle, proceeded to swirl the bottle, and then poured it into the carboy. Within the dregs of this bottle lie my souring agents. The Temptation contains Russian Rivers special blend of Brettanomyces, Lactobacillus, and Pediococcus. There were not a lot of residual sugars left in the Saison (gravity was down to 1.011 at bottling) but there are enough from them to eat. The Lacto and Pedio will provide the sourness, while the Brett will help to clean up the DMS that the Pedio leaves behind, while providing some extra aroma and flavor.

The only problem is that they work slowly, I wont know if the beer is being soured for at least 2 or 3 months, possibly longer. I will just have to take samples every couple of months to see if it is at a place that I like. Sour beers are about feel and less about timelines and precision.  Ideally I would have a different batch to blend to taste, but I don’t have that luxury. Hopefully it will turn out to be something tasty but only time will tell.

(8/6/11) - Racked onto wine soaked oak cubes with the dregs of Russian River Temptation and placed under the stairs.

(9/31/11) - Added a little food for the Brett. I boiled a mix of 1/8 cup DME and 1/8 cup Maltodextrin (Brett loves to eat Maltodextrin). It still smelled like my regular, base Saison. Spicy, fruity, and floral.

(10/6/11) - A nice pellicle has formed on the top of the beer… that’s a good sign. I’ll probably take a taste test maybe in another month or so to see where it’s at in the souring stage. Mostly to see if it’s changed at all.

(10/5/12) - Finally took a taste test. Nice and sour, pretty high acidity. I'll definitely bottle soon. I need to borrow my Dad's corker so I can cork the bottles. I don't have to do that but I'd like to. My plan is to add priming sugar and some brett-brux. Maybe I'll brew a 100% brett-brux IPA to use the rest of my citra hops and use a little of the yeast for bottle conditioning.

(11/23/12) - Bottled with 0.6 cups of table sugar and a bit of the Brett-Brux Trois that I made a starter for the Brett IPA I'm brewing. I chose to use 29mm caps since I wanted to use the thicker Belgian style bottles. Little did I know that I need a different capper. I got them on but so far 4 of them have leaked. I'm going to buy the attachment I need to cap them correctly and then recap and wax just in case.