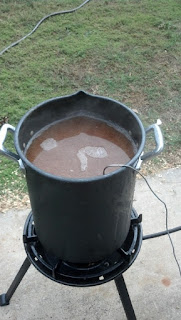 I wanted to name this beer Feisty Otter because I thought it was a funny name. Little did I know that it would live up to its name during brewing. Everything started out fine, hit my mash temperature, all of the water and grain fit into my mash tun, and the first two vorlaufs went smoothly. That’s where the problems started. After the first two circulations my mash tun manifold clogged. I’m not sure how it happened but the actual valve clogged. I didn’t know this was the problem so I attempted to stir the mash; this caused me to accidently knock my manifold loose. Eventually I had to resort to using my hop bag as a filter to prevent the kettle from filling up with grain. It took me about an hour and a half to finally lauter all of my wort.

I ended up with about 7 gallons of 1.065 (I think) wort. The plan was to boil the wort until it reached 3 gallons, which should produce Millard effects during the extended boil and sugar concentration. The Millard effects will cause caramelization, which will darken the wort and increase the complexity of the beer. Despite the fact that I used a single pale malt it should be surprisingly dark. The boil took about 3.5 hours and I added the hops in at 75 minutes left in the boil. For the last 45 minutes I had to really watch the boil because it started to caramelize, similar to making candi sugar, and began to boil up and almost boil over. I had to sit there and watch it and blow on the bubbles to keep the wort from boiling over. Once I reached 3 gallons I started chilling using my immersion chiller. When the beer hit 80 degrees I added 2 gallons of pre-chilled sterile water. This dropped the temperature to 66 degrees. I pitched the 2 liter starter that I made and placed into my newly acquired chest freezer (a birthday present from my fiancée). 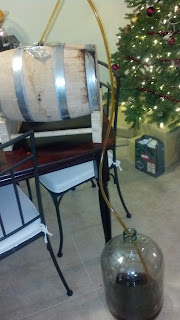 I plan on leaving the beer in primary for 3 weeks then racking into the barrel that is housing my Impreial stout. I’ll let it rest for another 3ish weeks in the barrel and then probably turn the barrel into a souring barrel.

I ended up coming way under gravity, which I anticipated just not this far under gravity. Of course this I’m attributing to my manifold failing. It’s funny, even though it’s easier to brew at our new house because I have more room, so far I have not been able to achieve a target gravity from one reason or another.

(10/27/12) – brewed by myself. As noted above I clearly had issues. I’m going to need to look at my mash tun and make sure these things stop happening. The boil took forever but I think I’ll have the desired result. Chilled to 66F and pitched yeast, placed in chest freezer set to 57F, should be fermenting around 62F with the energy the yeast creates.


(11/17/12) - Racked beer into the barrel that held Flight by Night. Gravity down to 1.030. There seems to be a decent amount of diacetyl, which will hopefully clear up. To clean the barrel I poured hot water into it, rolled it back and fourth and dumped it. Then I added the barleywine after it cooled off a bit.

(12/10/12) - Racked beer back into a carboy for extended aging. It tasted pretty good and looked really nice but the alcohol phenols were out of control. I'm assuming this was because of the spirits left in the barrel. I was surprised by how boozy it smelled since I had just used it for an RIS.

(1/27/12) -  Bottled with 0.3 cups of table sugar. Gravity down to 1.033, much higher then I wanted, hopefully it wont be too sweet. It tasted very good and smelled amazing but it was pretty sweet.