Over the weekend I decided to finally get around to building my stir plate. I think I was inspired after reading Yeast. I knew yeast played a large role in beer’s character I guess I was just always intimidated by starter production. I’ve been making starters ever since my third batch of beer but I never really paid attention to exact quantities. I essentially said to myself “even though I know it’s not perfect, making a starter is better than not making a starter.” I had always planned on making one. I’ve owned the cigar box that I used as the housing for almost two years. All I needed to do was actually go to Radioshack® and buy everything else that I needed. 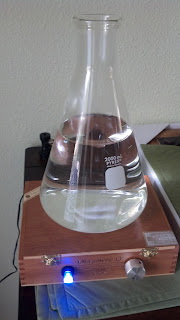 I’ve seen many examples on the internet some more complex than others. I decided to go with a simple design that I could adjust if need be in the future.

Procedure:
1)      First I started by drilling holes into my cigar box. I used a one inch drill bit for the holes in the front that would house the switch and rheostat. Then I drilled a hole in the back for the power adaptor along with some air holes for heat dissipation. Finally I measured the holes on the top to mount my fan and drilled those holes. I decided to counter sink the screws on the top so I used a slightly larger bit and drilled half way into the top to lower the heads of the screws.
2)      I attached the switch and rheostat to the front of the box. I needed to turn my rheostat to the side so it would fit with the lid closed. 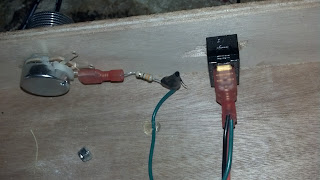 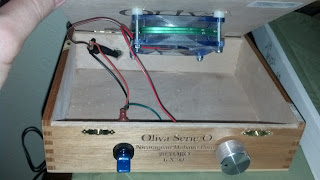 6)      I plugged it in and success it works. I noticed that the fan was spinning too fast so I decided to attach a resistor between the switch and the rheostat to lower the incoming voltage.
7)      The resistor was attached to the load line and then to the rheostat. This time when I tested it the fan was working better.
8)      Now that I know it works I used a hot glue gun to attach the magnets. I used a rubber washer to attach the metal washer to the fan. It should provide some give to the spinning magnets so the system is less ridged.
9)      I glued the magnets to the metal washer and then glued the metal washer to the fan. The metal washer is designed to help keep some of the magnetic field from messing with the components of the fan. 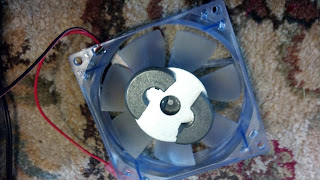 10)   I placed the plastic washers in between the cigar box and the fan to keep the magnets as close to the top as possible without touching it. Then I bolted the fan on.
11)   Finally I closed it up and voila! I have a stir plate.

The process was actually pretty simple. It only took me a couple of days because I was doing it while watching the Stanly Cup finals and I needed to pick up a resistor later and stronger magnets. In total it probably cost me $30. It would have been cheaper if I didn’t need to spend $7 on wire and $10 on wire strippers (both of which I used to have until I left them with my boss at my first job).
Posted by James at 12:00 PM