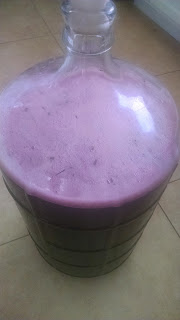 To date the only things I’ve fermented are beer and bread. It’s not like I’m opposed to other beverages, and I’d like to start fermenting vegetables at some point, I just don’t normally want as much as the end product will produce and a small batch isn’t worth the time to me. I, however, have a friend who really enjoys wine. I told her “you know, you could always make it yourself.” I wouldn’t generally tell people that if you start to brew beer at home it will save you money, because most people that end up getting really into it invest a lot of money in equipment. Although, often, justified to make better, it certainly isn’t cheaper than buying a case of SNPA. She agreed that we should try it, because I already had all of the equipment we would need and actually had an open carboy for a change.

We went with a wine kit, having never made it before, we both felt that would be the best way to make sure we come out with something drinkable.  We went with a vintners reserve series, because it came with everything we would need, yeast, fining agents, and stabilizers. The process was much different from brewing beer, even brewing an extract batch.

Step 1: Pour in a half gallon of water into a cleaned container (it didn’t specify sanitized, even though I used 5 Star, I guess it’s not as emphasized in the wine industry) and add the bentonite. Stir until dissolved.

Step 3: Pitch yeast, wood powder and shake to mix thoroughly (the instructions didn’t specify to oxygenate, I would assume because either most home wine makers don’t have an oxygenation kit or because it’s not necessary). It was at this point that we were done. It didn’t have the same feeling of accomplish than that of brewing beer. Even extract brewing involves boiling and sometimes adding hops and chilling your boil. Wine, from a kit, is much more like adding ingredients together in a bowl, mixing and letting it sit. 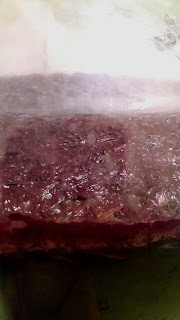 Step 4: Let the wine ferment in a cool (64F-72F) dark location for 5-7 days or until the gravity reaches 1.010. It took my batch a little bit longer due to my house being colder. At the end I wrapped my heater around it to warm it up to 72F.

Step 5: Once the gravity has reached 1.010 rack the wine to a secondary vessel. I wasn’t sure if this was something that you are told to do in wine making, just as in brewing, from instructions, even though it usually isn’t necessary. However, I did it anyway.

Step 6: When the wine has reached terminal gravity, roughly 10 days (0.996-0.998) add the stabilizers (metabisulphite and sorbate) to a cup of water and pour into the carboy. These are killing the yeast and potentially anything else in the wine so that it won’t carbonate in bottles if you are planning on adding sugar to back sweeten the wine or if the yeast were not finished. Shake the carboy or use a cleaned stirrer to degas the wine of residual carbonation.

Step 7: Pour in fining agents to clarify the wine. I’ve never used finning agents before, but the instructions said to degas before or they won’t work.  Wait 14 days for the wine to clear fully.

Step 8: After the wine has cleared and stabilized it’s time to bottle. I used my normal process, minus adding priming sugar. We went all fancy and actually used my corker for wine bottles and when we ran out of wine bottles I just filled up some beer bottles. 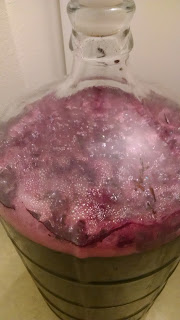 At this point the wine is ready to drink, since it doesn’t need to be carbonated. At the end of the day it, as I stated earlier, it wasn’t as satisfying of a process as is brewing. What I like about brewing is that you have the ability to buy the same ingredients as professional brewers. With wine, the grapes do the speaking and many are only available to the grower. I felt like making wine was more like baby-sitting, not to belittle it, but when even compared to watered down beer production, there isn’t much you have to do. Use good grape must and take care of the yeast, you can make good wine. I’m not going to say it was the best wine ever, but it was definitely not the worst either. I have no problem making wine again, but I probably won’t be doing it for myself, as I’m rarely in the mood for a bottle or wine (maybe I’ll have to make a steak sometime for that).  It was an interesting experience, but I think I’ll stick to beer production.