There has been a recent trend and discussion between home brewers and between beer nerds regarding the clarity of beer and how it affects flavor and aroma. Some people believe that a hazy beer is a sign of “handmade craft” and clear beer is mass produced swill. On the other side of the debate, there is a discussion on whether or not the appearance of a beer changes the flavor. The long standard for IPA has most often come from the west coast. These IPAs are usually aggressively bittered, clear or with slight chill haze, dry finish and usually a combination of citrus and pine flavors and aromas. All of the sudden a different tasting IPA started coming out of New England, mainly Vermont, but has now spread to other areas in NE. These IPAs are usually very hazy, often described as turbid, with a soft creamy mouthfeel, with flavor and aroma usually described as “juicy.” 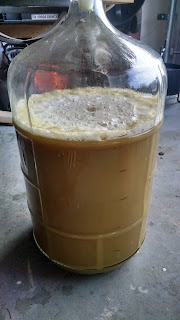 The debate rages around the appearance of the two different beers. Does the turbidity of the beer drastically affect the flavor and aroma? I personally don’t think that it does as much as people think. But since some of the IPAs that are coming out of NE are some of my favorite beers, I figured I’d attempt making one. I have a bunch of the 2015 harvest that I purchased and needed something to do with them. I believe that the flavor and aroma differences are less dependent on base grains, yeast, and appearance and more dependent on hop varietal selection and timing on hop addition. The grain bill I used is similar to the Mad Fermentationist attempt on a “NE style” IPA, however, I increased the pale malt to up my ABV to something similar to what I see coming out of NE. In the future I’m going to attempt to rebrew this beer using the same hop schedule and a different yeast and grain bill to make it more “west coast” style.

Normally I don’t mess with RO water, since I don’t have an RO system and it’s a pain to have to pick up and transport 5 gallons of water home. However, I decided to use it this time to cut down on my CaCO3 concentration. I feel that when you’re using a large amount of hops the CaCO3 causes an astringent taste and affects the aroma. I used the RO water to sparge so that my mash pH wouldn’t be too low like it was the last time I mashed with RO water.

Notes:
3/28/16 – Brewed by myself. Added 6 grams of CaCl, 2 grams of gypsum to the mash, and 16ml of Lactic acid. Mash pH was 5.45 and my target was 5.28. Pre boil gravity measured at 1.058 and I collected 7 gallons. Sparge water was RO water with no adjustments made. Final boil pH measured at 5.3. Wort chilled to 72F and oxygenated with pure O2 for 45 seconds, then placed in bathroom at ambient temperature of 68F. Pitched yeast and 4 hours later I added the fermentation hops.