Every year I buy a slim keg of Sierra Nevada Celebration ale because I realized that I love that beer and normally buy close to that amount in bottles. Why not buy the same quantity and keep it in a closed system? In theory the beer will stay fresher longer than if I were buying it in bottles, but really time is not a factor since I try to consume it quickly. I’m a professional, remember? Due to the fact that I always buy a keg of it I’ve never attempted to clone it. I also generally don’t like cloning beers that I can buy, because what’s the point? However, I can only buy Celebration seasonally, which means if I want to drink it now I can’t. Unless I’m drinking really old bottles. After looking into it I realized I basically only needed two different hops, aside from one addition in the beginning, I just needed Centennial and Cascade. I was low on Cascade and its cheaper to buy hops in bulk, so I put in an order for a pound of each. I didn’t need a pound of Centennial, but it gave me an excuse to try a Two Hearted clone (which is also one of my favorite beers that I’ve never tried to clone). Before anyone says anything, I’m aware that Celebration ale is a wet hop beer and I’m not using wet hops, but I’m trying to make a beer as close as possible without using the exact same ingredients. 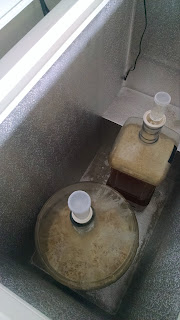 I’m going to start by saying there were definitely a few issues during this brew day. I normally brew alone so when I brew with someone else it usually throws me off and I become distracted. On top of that I thought I planned to rack off a gallon to be used in a cider, but I didn’t take into account the volume difference, just the gravity. Then just for good measure my whirlpool hose clamp decided to not hold the hose and spray hot wort all over the garage. All and all I ended up with about 3 gallons of beer when I was planning on 5 gallons. Slightly disappointing, but since this is the first time I’ve brewed this recipe I’ll probably want to tweak it and rebrew in the future, I just don’t have to wait as long with only 3 gallons.

7/16/16 – Brewed with Melody. Added 5 grams of gypsum and 0.5 grams of CaCl to the mash. Sparged with RO water. Mash ph measured at 5.27. Racked one gallon from the kettle to do a side boil for the cider. Pre-boil gravity 1.055. Chilled to 80F, which is as cold as I can get it in the summer, added pure O2 for 45 seconds and placed in chest freezer to chill wort to 65F. Yeast pitched 3 hours later after wort is correct temperature.