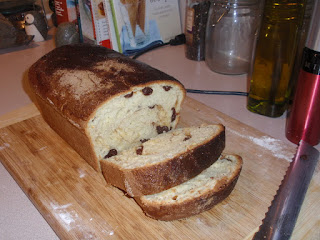 Add the yeast to the 3 table spoons of warm water in a mixing bowl and let the yeast hydrate for about 5 minutes, or until dissolved. After the yeast has been re-hydrated mix in the egg, the milk, the warm melted butter (make sure the butter is not too hot), the sugar, and the salt. After all of the ingredients are well mixed, add in the flour and kneed until stretchy but not sticky. If needed add in more flour or water.  Place the dough in an oiled bowl and cover with a damp rag or plastic wrap. Let the dough rise for one hour.
After 45 minutes add the raisins to a pot and cover them with water. Heat the water to a boil and let the raisins boil for 3-5 minutes, or until they have re-hydrated.  Strain the raisins and let them cool to about room temperature. When the dough has finished its first rise place it on a floured surface and roll it out into a rectangular shape about 8X15inches or until it is about half an inch thick. When the dough is flattened out, brush on melted butter and spread the sugar and cinnamon mixture over the surface, making sure to leave some sugar and cinnamon for the outside of the bread.  After the sugar mixture is placed on the dough spread out the raisins evenly.

Start to roll the dough by starting at the shorter side and rolling itself up like a burrito. As the dough is being rolled pinch the sides in to close them off. Once the dough has been rolled up, rub butter on the edge and pinch it together to seal the dough. Place the dough in a bread pan and let it rise for another hour. After the bread has risen brush on an egg wash (to make the egg wash mix an egg in a small bowl) over the top. Sprinkle on the remaining sugar and cinnamon over the top of the dough.
Place the dough in a pre-heated oven at 375 degrees F for 40-45 minutes. The bread should sound hollow when thumped. Place on a cooling rack, then slice and enjoy.

Ingredients for Milk Bread:
Ingredients for Raisin Bread:
Recipe based off the cinnamon bread recipe from the Joy of Cooking.
Posted by James at 8:43 AM