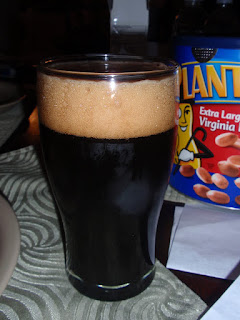 Based off of Founder’s Porter.
Ingredients
%       LB OZ         Malt or Fermentable
use            time       oz       variety        form       aa
Yeast
Extras
For this beer I employed a mini-mash technique.  I took the specialty grains and placed them in an insulated (blanket wrapped around) bottling bucket and mashed 155 degree F.  This is before I had built my MLT (mash, lauter tun) cooler.  The mash step ended up mashing at a much lower temperature some where in the 140s, which ended up giving me more fermentables.  This made me worry that I wouldn’t have the body that I was hoping for in the finished product and it would finish too dry.  My initial sparge technique wasn’t much better. I used a strainer that I  had purchased a while ago and attempted to pour the wort through the strainer and into my kettle.  It sort or worked but I’m sure I ended up pouring a lot of proteins and some grain into the kettle. Meanwhile, I was simultaneously heating my sparge water to 170 degrees F. I poured that onto the top of the grains let it sit for another 10 minutes and attempted to lauter (pour through strainer) again. I ended up with around two gallons of water, brought it up to a boil, followed my hop schedule and added the extract in the last 15 minutes. This time I was able to use a wort chiller, which really helped speed up the cooling process. I poured it through a funnel and strainer into my carboy and topped off with water up to 5 gallons, aerated and pitched my yeast. I let it sit in primary for 3 weeks and then bottled. I let the beers condition for 2 weeks, but initially they had an issue with fusel alcohol, but that has long since faded as they yeast in the bottle are cleaning things up.

Tasting notes
I’m really happy with the way this one turned out. The only thing I would change might be my mash technique, so I don’t extract as many tannins. This was before I constructed a mash tun so I worked with what I had. There isa lot of dark chocolate in the aroma and a little bit of roastiness. The mouthfeel is very nice. Thicker then anything I have brewed before with moderate carbonation. Its pitch black, with a nice thick tan head. The head retention is not what I prefer, but it does last a little while and eventually die down to a thick lacing on the top of the beer. The taste is chocolatey, roasty, and a small amount of tannins. Overall I’m very pleased with this one.  The FG finished at around 1.020 which is higher than I had calculated but better than I thought it would finish. The OG was 1.071, thus, giving me an ABV of 6.8%
Posted by James at 8:38 AM