For my first attempt at barrel aging I figured I would start with something simple. The barrel that I used was a bourbon barrel from Ranger Creek Brewstillary in San Antonio. Since I did not have options on the type of barrel I had the ability to choose the type of beer to put into the barrel. I decided to go with an Imperial Stout, which is a combination that is often utilized. Since it was a fresh barrel I wanted something that could stand up to the bourbon and oak. 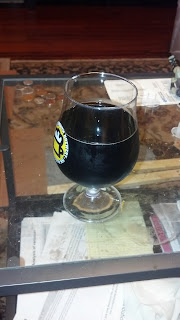 Appearance: It pours black with no noticeable head. If there was one thing I would change about the beer it would be the head retention.

Aroma: The aroma is great. Chocolate, vanilla, bourbon, coffee and oak with only a hint of alcohol. I’m very pleased with the aroma, it’s a little muted but I think that’s fine.

Taste: chocolate, oak and bourbon are the predominate flavors with an alcoholic warming sensation on the back end. It’s a touch boozy for me but I think it will age nicely. I’m not sure if the booziness comes from the bourbon or from the beer itself. This was the last beer that I brewed before I had fermentation temperature control.

Mouthfeel: I’m slightly disappointed with the mouthfeel. The beer is relatively thick but I think it’s a touch undercarbonated. I wanted it to be on the low end of the carbonation spectrum but I think I under-anticipated the amount of priming sugar to use. It has a slightly prickly mouthfeel but it will lose the carbonation before the end of the glass making it seem flat and uncarbonated.

Overall: I’m very pleased with my first attempt at a barrel aged beer. There are a few aspects that I would like to improve upon but those aspects are related to brewing or bottling and not to barrel aging.
Posted by James at 12:00 PM