This was the second beer that I intended to brew during my holiday break. I wanted to brew a beer as part of our wedding favors. The plan is to use Belgian 750 ml bottles and wax dip them. I also would like for my fiancée to use Photoshop to create labels for the bottles. 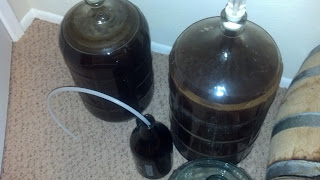 On to the beer…I wanted something that was approachable, yet complex, yet still something intriguing. I finally decided on a Saison. Saisons are one of my favorite styles because of their broad range of interpretations, as well as, their yeast driven nature. For this particular beer I decided to use the dregs from a bottle of Fantôme Noel. In my opinion Fantôme is the quintessential Saison producer. I love the combination of aromas you get from their beers and the subtle tartness. I also wanted to go a little untraditional and brew a Saison that was reddish, trying to make a beer that was intriguing to look at. I want people to look at the beer and expect something different. I think Saisons are a great beer for people that are new to the craft beer world because they are dry and refreshing and usually low hopped.

I haven’t fully decided if I’m going to do anything else with this beer i.e. dry hopping. If I love the aroma when it’s finished then I’ll probably leave it as is and bottle. If not I think a fruity or spicy hop would be a nice compliment. This batch also ended up being a 10 gallon batch since I needed to make enough beer to have 750ml bottles available to every guest. Hopefully I brewed enough.  All I have to do now is determine a name for the beer. Any suggestions?

As far as the brew day is concerned everything was going fine. I had to brew in the garage this time since it was raining. It wasn’t bad except I had to figure out the logistics of my set up. I probably should have placed the burner closer to the garage door so I didn’t spray water all over the garage while I was cooling. The only problem that I encountered was that I forgot to add the Belgian Dark Candi syrup during the boil and was forced to boil it separately and then add it later.  The two batches when split came within 0.002 points of each other. I plan on blending them at bottling so the difference will not matter.

Yeast:
Fantôme Noel dregs (from a starter made a week and a half earlier, stepped up twice)

Notes:
(12/31/12) – Brewed by myself. Chilled to 80F and was about to pitch the yeast until I noticed the candi syrup still sitting behind me. I let the wort chill further in the carboys for a few hours while I was at the store. Then I boiled the candi syrup for 5 minutes and added it to the carboys. I was finally over my anticipated gravity and back to my normal efficiency. I think the double crush helped. Added the yeast in the evening, shook to aerate and moved the carboys upstairs to ferment in a warmer environment.

(1/13/13) - Very acidic. More then likely infected. I'm going to have to brew a different beer for the wedding. I think I'll hold on to this one a little longer and see how it develops. Worst comes to worst I'll dump the batch.

(2/18/13) - It has definitely changed from when I last tried it. It is no longer sharply acidic, still acidic but no longer bittingly sour. It has developed more cherry notes then it previously had. Originally I was worried about acetobacter, but it might not be acetobacter. I might add some Brett dregs and let it age a little longer. I might also add some cherries to accentuate the cherry flavor. I'm not sure yet.