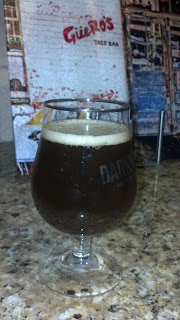 This was my second attempt at a barrel aged beer. After I racked my RIS into a tertiary carboy for some extended aging, I added my English style barleywine to the barrel. For this barleywine I wanted to employ an old English tactic for complexity. I chose to use 100% Maris Otter malt and give it an extended boil. The hope was to boil the wort down to a low volume, which increases the sugars and hopefully raises the temperature above boiling, and thus, increases the Millard effects on the sugars. It was an interesting procedure and next time I’ll probably just take the first running and boil it down. Adding the second running was a waste of time since I was just boiling off the water to increase the gravity. Next time I’ll probably use the second runnings for a mild or something.

Appearance: Clear dark mahogany with deep reddish hues and an off white head about a finger thick that slowly fades to a thin lacing over the top of the beer. I would have to say this beer turned out very dark for being brewed with only pale malt. It’s kind of impressive what the extended boil contributed, or at least what I’m attributing the effects of the extended boil.

Aroma: Caramel, a hint of vanilla and oak, lots of raisins, some figs and various dark fruits with a splash of bourbon. The aroma turned out fruiter then I expected it to. I wish some of the other aspects were more pronounced then they were and that the raisin was a little toned down.

Taste: More raisins on the front end with caramel after notes and a woody tannin finish. It’s sweet but the bourbon complements it well and I think the oak helps prevent it from being too cloying. I would have preferred it to be more complex like the aroma, but for being single malt its pretty complex.
Mouthfeel: Medium body with medium carbonation, perhaps a touch over carbonated, which makes the body feel a little thinner then it in actuality.

Overall: I enjoy the beer and I think it should age well. The tannins should fade with time and I think some of the other aspects that I don’t particularly enjoy will also fade and it should round out. I look forward to holding on to it until next winter and see how it has changed. In the future I think I can gain further complexity from adding different malts instead of the extended boil. It was an interesting experience and I’m glad I tried it but I’m not sure it is worth it in the long run.
Posted by James at 9:33 AM