It took me a long time to decide what I wanted to brew to serve at our wedding. I finally decided that since I’m going to have another commercial beer there that I will brew something I want to drink. It will be late spring in Texas so I wanted something refreshing, thus I decided on a low ABV IPA, al la Founders All Day IPA. I decided to also try some new brewing techniques while I was at it, hop bursting and no sparge. I read on the Mad Fermentationist that a no sparge technique is ideal for a low ABV beer. It helps keep the integrity of the body and helps it not seem watered down. I also have read that hop bursting is ideal for aroma. This technique pertains to adding the hops to the last 15 minutes of the boil so that most of the aroma remains intact. Since this beer is going to be a low ABV session ale I wasn’t worried about having my IBU total too low with the hop bursting. Since I was adding about 4 ounces of hops in the last 15 minutes it should give me something pretty close to 40 IBUs, which sounds low for an IPA but when you take into account the ABV it’s pretty high. Most IPAs are in the 7-6% ABV range and the 80-60 IBU range. Going off of that ratio 4%ABV and 40 IBU should be just about right. I also attempted to adjust the water again as I have done in my last few beers. It definitely made my last IPA much better so I wanted to mimic that. 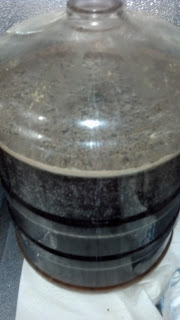 This sound great until it comes down to execution. Everything that went wrong was mostly my fault since I was multitasking and repairing my car at the same time. I didn’t have time to brew and work on my car over separate days or weekends so I attempted to do it at the same time. Well because of this I forgot to add my salts to the mash, didn’t notice that the homebrew store added my flaked oats to a separate bag, mash was too hot so I had to add ice cubes, and had a near boil over (even though it was 5 gallons in a 15 gallon keg). I decided that adding the salts to the boil should produce the same affect, but who knows I could be wrong. I also tried to rectify the oats situation by again employing another Mad Fermentationist technique by adding quick oats to the end of the boil. I was in the process of freaking out about missing the oats while my fiancée calmly searched adding oats to beer and found Mike’s old article. I also threw a little DME and table sugar in at the end of the boil as an attempt to add the lost sugar from the missing oats and I also added a little Maltodextrin to hopefully add the body I was hoping to gain from the oats. I might add more at kegging if I feel it’s too thin.  Turns out I probably didn’t need to add the sugar since my OG was 1.043, actually higher then I was expecting. I was expecting a lower efficiency due to the lack of a sparge to remove the remaining sugars.

Biggest thing I learned from this brew day is don’t do other things while you brew. Oh and also RDWHAHB.

Mash Schedule:
Mashed for 45 minutes at 155F, no sparge

Notes:
3/23/13 – Brewed by myself. As stated above everything that could have gone wrong happened. Mash read 160F when I initially added the water so I added some ice cubes and stirred until I got it down to 155F. I added the salts to the boil and the quick oats in the last 10 minutes, since the regular oats were not added as planned. Chilled to 68F and pitched a 1 liter starter that I made 3 days prior. Gravity reading was 1.043. Left to ferment in the chest freezer at 68F. 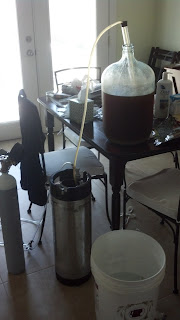 4/3/13 - Took a taste test and turned down the chest freezer temperature to 35F to cold crash. There might be brett in it since it looked like there was a pellicle in between the hops, but I could be wrong. The beer smelled and tasted amazing. I'll dry hop it in two days and rack to a secondary carboy.

4/12/13 - Racked to the keg with 3 ounces of whole leaf hops placed into a bag. I carbonated the keg to 15psi and placed it in the freezer.

4/15/13 - The flow rate is really slow. I'm pretty sure the dip tube is clogged. I switched the gas side to the liquid side and open the valve. Then I switched it back and it's flowing fine now. A little under carbonated the but smell and taste is right where I want it.