This is another late review that I’m finally getting around to posting. I brewed this beer to be the second of two kegs for my wedding in late April. It took me forever to decide what I wanted to brew for the wedding. Do I brewing something with mass appeal or do I brew something that I’m going to like? I decided that since I was getting an Irish stout from Freetail Brewing, which should appeal to those that don’t like “light beers,” that I could brew something I would like. I wanted something low in alcohol with a powerful aroma. I was pleasantly surprised that it was very popular at the wedding. I was hoping to have some to review after the wedding but I stored the kegs in my Aunt’s freezer while we were still in Austin and by the time I was able to get them back the IPA had been finished. 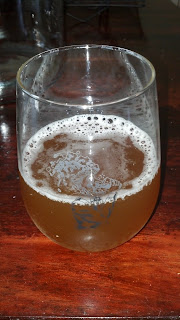 Appearance: It pours a hazy pale straw yellow with orange hues and small hop particles floating in the glass. I need to work on my filtering better. The head is a thin white head with small dense bubbles. It quickly fades to a thin ring around the glass. I’m not sure whether to attribute this to the beer, the jockey box, or the fact that it was sitting in a pitcher before it was poured into my glass.

Aroma: This is where I wanted the beer to shine and it didn’t disappoint. Big hop nose with grapefruit, citrus, guava, and mango dominating. The Citra is really shining through. There is a hint of pine in the back ground but not enough to turn people off. I would say the hop bursting and the keg hopping was a success. I’m not sure about how extended keg hopping would work because it obviously didn’t last that long, but I can always try again in the future.

Taste: I’m very happy with the taste of this beer. I was worried that my IBU balance would have been too high since the ABV was so low. I kept it at around 40 IBUs. The flavors consisted of grapefruit and peach with some citrus notes and a slightly bready finish. I was surprised that there was still some malt body left.
Mouthfeel: Medium carbonation with a nice dry finish that had a short lingering bitterness. I was worried before I tried the keg that it would be over carbonated which would make the body seem too watery. Then I was worried after I initially tried it that the carbonation was too low. It ended up just about where I wanted it.

Overall: This was the first beer that I have ever kegged so I was kind of winging it. I’m glad that it worked out fine. On top of never kegging I had never used a jockey box. My week at work prior to our wedding was spent reading about kegging and using jockey boxes. The glass I had at our wedding seemed as if the carbonation was fine and the jockey box seemed to have a decent flow rate. The beers were definitely cold so I guess it worked. I’m very pleased with how this beer turned out. I’m sad that I only had one glass of it but I’m glad that it was so popular. I guess it’s better to brew a beer and only have one glass because everyone liked it rather than having a lot left because everyone hated it. It turned out exactly the way I wanted it to and I’ll have to brew it again for the summer. Once I have some keg space cleared up for the beers that I’m planning on brewing.

Side note: The first time I tried to pour from the keg and test the beer it was clogged. I’m not sure if it was hop particles or yeast or the hop bag but the flow rate was really slow. I quickly researched how to remedy the situation. Most solutions involved releasing the pressure and removing the drain spout to clean it. My problem was that this was the day before our wedding so I didn’t have the time to do that. One person mentioned putting the gas port on the liquid side and using it to blow the gunk out of the way. My recommendation for doing that is be careful. Make sure the gas is on and the valve is already open so that you do not have the beer enter and ruin your regulator. Also make sure that the pressure is already set higher than your keg pressure. The gas side is not designed to fit on the liquid side but it will fit with some force. It is also hard to remove. However, it did fix my problem and it was never clogged after that.
Posted by James at 9:14 AM