By no means have I brewed every style, but honestly there are some styles I just don’t care for so why should I brew them? My favorite category of beers is easily sours, however, there is one style in that group that I had yet to brew. I have yet to brew a Berlinerweisse, even though a good Berliner, can be very enjoyable and refreshing, especially in the middle of the summer in Texas. Honestly I’ve been afraid of attempting to brew a Berliner. Most people consider American Light Lager (AAL) to be the most difficult style to brew. AAL’s generally are so light and delicate that any flaw will stand out. I consider Berliners to be the most difficult style because of its unusual fermentation process (using Lacto) and because if the beer goes bad it smells like vomit. If you fail at making an AAL it will at least probably be drinkable, whereas, a bad Berliner will be something difficult to remove from your mind and keep yourself from throwing up. The reason that a Berliner becomes something that haunts your dreams is because during souring the beer does not have alcohol to prevent bacteria from producing Butyric Acid. It also needs to be kept at an elevated temperature (~120F), which is perfect for this bacteria. The best defense is lower pH and no Oxygen. 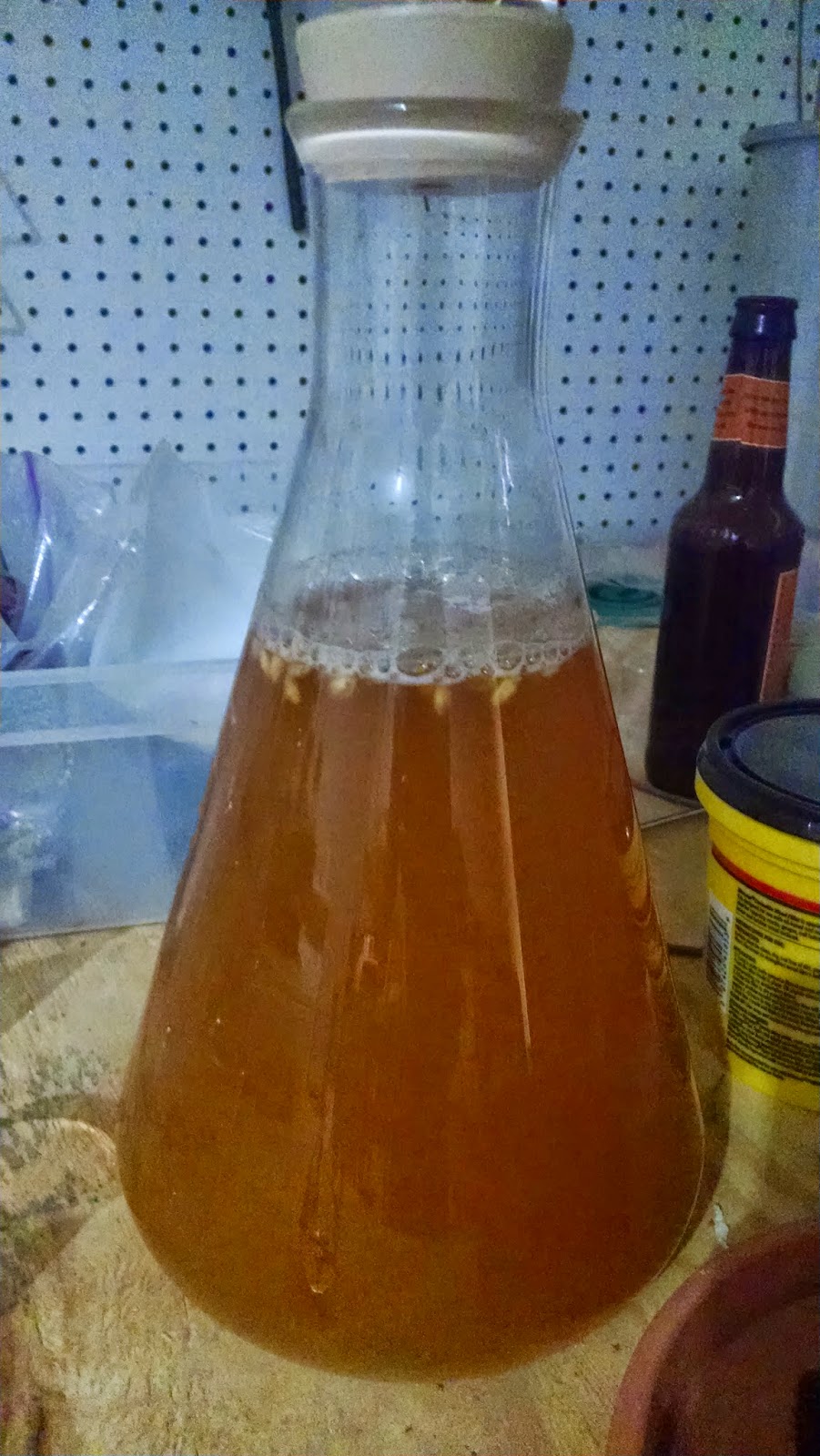 I’ve done a lot of research on brewing a Berliner and there are 3 basic ways to go about brewing one (there are more variations with in each but 3 basic ways).

1)     Mash normally, bring to a boil, purge with CO2, add pure lacto culture and hold until sour. Finally bring to 180F to kill the lacto and pitch yeast to ferment.
2)     Replace pure lab culture with a lacto starter using the grain (Lacto is naturally occurring on grain husk).
3)     Preform a sour mash. Similar to choice (2), however the grain is tossed into the mash tun after the temperature is lowered to 120F. Once soured the wort is brought to a boil and yeast is pitched.

I chose to somewhat go with step 2, but do it my own way. I brewed the Berliner as part of a Hefeweizen so I’m not concerned with having to dump 3 gallons if it doesn’t work out, but at least I’ll learn something.

I began by making a sour starter using the grain. I made a normal 1.5L starter chilled it to 100F, added some grain, purged with CO2, and placed in my hot garage. I left it there for 3 days. When I brewed I took a smell before pouring it into the carboy and it smelled slightly grainy and without any vomit. There was definitely Brett on the grain husk as well. I brewed enough for 8 gallons of Hefeweizen. After mashing out I was under gravity and over volume so I boiled to reduce and concentrate, then I racked 3 gallons off into a corny to chill and rack to a carboy. I didn’t add any ice to my wort chiller so it brought the temperature down to 128F. I didn’t notice this until after I pitched the starter, but it shouldn’t hurt anything. After pitching I purged with CO2, I added 3 mL of Lactic acid in an attempt to lower the pH to 4.5 as was suggested by Chad Chad Yakobson, then I left it in my garage. I didn’t take a pH reading because I need to recalibrate my meter and to be honest I was hungover from the day before and just didn’t care enough. 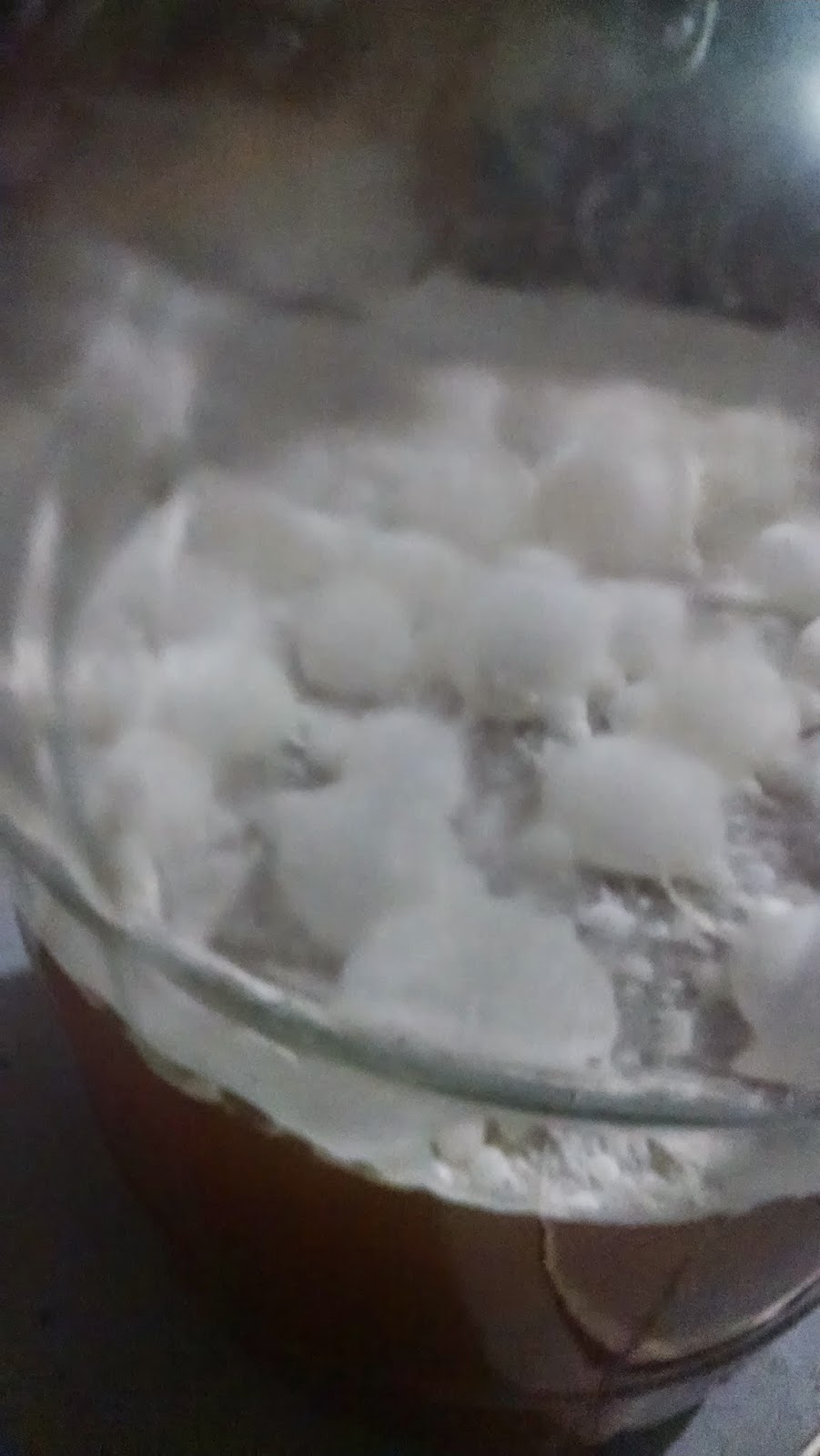 The base grains were roughly 50% wheat and 50% malt. No hops were added in an attempt to not throttle the Lacto at all.

8/28/14 – Grainy aroma and flavor with only a slight tartness. I added some Cascade Strawberry dregs to hopefully give it some super Cascade lacto.

8/30/14 – The craziest pellicle I have ever seen has formed. The bubbles are larger the softballs.

9/9/14 - More acidic then it was before, definitely smells like Cascade.