One of my favorite beers that I was lucky enough to get to try last year was Saison Bernice from Sante Adarius Rustic Ales. I was able to drink practically as much as I wanted from What the Funk?! last year and received a bottle in a trade a few weeks later. Since I already knew how awesome that beer was I immediately knew that I wanted to harvest the dregs to try to use them in a beer. Tim Clifford was nice enough to give out the recipe on Brewing Network’s Sour Hour. Knowing this I figured I might as well at least attempt to make something similar (add try my hand at West Ashley as well). The recipe itself is not very complicated. I believe most of the grain bill is for mouthfeel, body, and color. The real magic is from the yeast and bug culture. 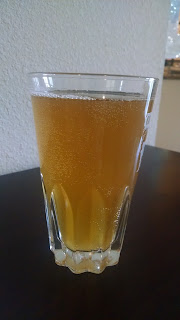 Appearance: Pours a hazy orange with yellow hues and a thin white head that fades quickly. Oddly enough I bottled in two different bottle sizes. The larger bottles are well carbonated but the smaller bottles are not.

Aroma: Green apples, stone fruit, peach, pear, with some spicy saison phenols. The most noticeable aroma is green apple. I’m not sure if it’s a “green” beer side effect or a characteristic from the yeast. I would prefer there be less green apple but there is a nice level of complexity with the saison characteristic still making an appearance. I’m curious to see if time will help clean up the apple notes.

Flavor: Like the aroma green apple is the predominate flavor with hints of pear and spices rounded out with some clean lactic acid. The acidity is definitely lactic, which compliments and brings out the green apple tartness.

Mouthfeel: The carbonation varies with bottle size. The smaller bottles it’s undercarbonated with a light carbonation and slick creamy mouthfeel. The larger format bottles are medium-high carbonation with a dry lactic finish and medium body. The body is nice considering how dry it finished. I’m not sure why the carbonation level varies like it does since I bottled this as a single batch.

Overall: I’m pleased with the character of this beer, although there are some things I would change. In the future I would try to add 3711 along with the 3724 the way Sante does for Bernice. I didn’t have any 3711 on hand at the time. I feel it would have added some extra fruity saison character that I don’t get from 3724. Another option would have been to blend back some straight 3711 saison at bottling. This would have helped to cut the acidity, which I also thought was a little high for the beer. As far as the green apple goes, I’m not sure what I could have done to prevent that. My best guess would be this is why Sante uses 3711 along with 3724. 3724 has a tendency to drop out of suspension halfway through fermentation, which could lead acetaldehyde production and it remaining in the beer. 3711 would have remained in suspension and cleaned up any remaining off flavors from fermentation. While the beer did reach full attenuation, it could have been from Brett as opposed to Sac, which is why that flavor was not cleaned up. I guess that gives me an excuse to brew this beer again.
Posted by James at 8:21 AM