It’s been a while since I’ve actually written anything, partially due to work travel and partially due to just general laziness, but I’m back. This beer is the third iteration of sour beer to come out of my sour barrel. The barrel itself is surprisingly going strong and it’s up to six generations of sour beer production. If you include the first two clean beers you’re looking at 8 uses, which is pretty good for a $70 barrel that I got almost 3 years ago. I really don’t do much to keep it going other than leaving it empty for no more than a day. As long as it’s full there is less risk of acetobacter and the barrel drying out and splitting. The one problem that I have with it is that it sours beers very quickly. That’s not a bad thing per se but it does require me to brew fairly often to keep it going. The beers that come out of it have a nice house funk character that I can recognize from batch to batch and a lactic acidity rather than a pedio acidity. 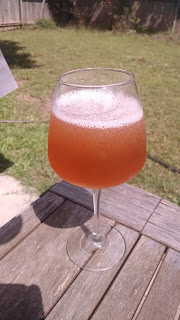 Appearance: The beer pours a hazy orange-yellow with a small amount of white head that quickly fades. I’m not surprised that the head retention is pour since the beer is not truly carbonated and sour beers usually have pour head retention since the Brett usually eats any protein structure given by any wheat I use.

Aroma: There is surprisingly still a hint of barrel character that comes across as oak. Light funk and some citrus notes. The acidity is apparent and there is a touch of vinegar as well. I remember the volume of this beer being too low and I never topped it up so I’m not shocked by the vinegar character.

Flavor: Sharp acidity up front and a light acetic character on the finish with citrus notes and funk in between. Oddly compared to the aroma the funk is much stronger in the flavor.

Mouthfeel: Low carbonation, dry finish with some sharp acidity. I’m hoping the carbonation will pick up, but I’m worried with the increased carbonation that the acidity will become even more apparent.

Overall: I think the acidity is a little sharp, which is probably due to the beer being in the barrel for too long. I try to pull them out a lot quicker than I have, but doing so requires me to have time to brew and refill it. I’m disappointed in the carbonation. I didn’t add any fresh yeast to increase the speed of the carbonation. I’ve done this in the past and the beer eventually carbonates usually, but it takes a while. Due to this I think I’m going to go back to using Champagne yeast to carbonate my sours. I like that its carbonated quicker and it also guarantees that the beer will carbonate because the yeast is fresh, rather than relying on old yeast.
Posted by James at 8:52 AM