My favorite Saisons are those that are slightly tart and funky. So far I’ve never really been able to make a beer that is slightly tart. I’ve tried adding bugs at different points during, after or before fermentation and the end result is more sourness than I would have preferred. Since I was planning on doing a dry hopped sour but wanted to cut the acidity a bit I brewed a straight Saison. After I came up with my blending ratio I still had left over sour beer and non-sour beer. I used the left over beer to blend a Saison that I figured would be slightly tart instead of fully sour. 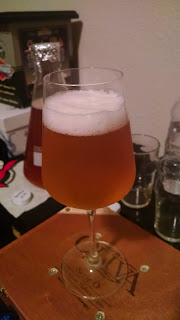 I had never blended beers before so I really had no idea what I was doing other than tasting different proportions and hoping it would work out. My process involved taking as close to equal amounts of each beer from a two different pitchers using a wine thief and placing them into different glasses. A better way would have been to weigh out the amount of liquid to have a more accurate ratio, but my method worked out. I made 4 different blends: 3 parts sour and one part Saison, half and half, 2 to 1 sour, and 3 to 1 Saison. I evaluated each blend for aroma and flavor and made adjustments if needed. When I decided on my blends I racked from the carboys into a bottling bucket and attempted to hit the same blend ratio on a gallon scale. In the end I ended up with around 5 gallons of dry hopped sour beer, 4 gallons of tart Saison and 1 gallon of Saison that I added cucumber juice to at a later date.

Appearance: Pours a hazy straw yellow with orange hues and a fluffy white head that fades relativity quickly. I was hoping for better head retention with the higher wheat content, but I think the acidity had its way. The beer does clear up as it warms up to become pretty clear. I’m assuming that the small amount of dry hops I added gave the beer some chill haze.

Aroma: Rustic barnyard funk and spicy phenolics with notes of lemon zest and lactic acid. I’m really pleased with the aroma. It’s everything I like in a good farmhouse Saison.
Taste: Black pepper and a hint of lemon tartness with a clean spicy base. There is a bit of funk on the finish.

Mouthfeel: Light body medium-high carbonation with a dry slightly tart finish. I wouldn’t mind some more carbonation but it’s not bad where it’s at currently. There is the possibility of more carbonation in the long run since there is Brett in the beer.

Overall: I’m very pleased with the results of this beer. It is exactly how I like my Saisons, slightly tart but still containing Saison character with some funk. Light, drinkable, refreshing and still complex. I’m very happy with how the blending came out. I know most home brewers can’t blend beers due to lack of space or time, but I’m probably going to start doing this to all of my Saisons. I normally have lots of sour beer sitting around, however, the only problem I would encounter would be finding time to brew regular Saisons and having carboys available.
Posted by James at 8:43 AM