After listening to The Sour Hour on The Brewing Network with Tim Clifford I was inspired to attempt a Saison Bernice clone since I had a bottle of Bernice. I also decided that I should attempt at making a West Ashley clone since it is only Bernice with apricot pureé added.  I had never used fruit pureé in a beer before and normally just use fresh fruit, but I figured I would stick with what Tim said on the podcast. The only thing that was different from their recipe was the lack of barrel use and I didn’t ferment with 3711 alongside 3724. In retrospect I will probably not use pureé any more due the amount of apricot gunk it left in my bottles. I also wasn’t particularly impressed with the aroma from the apricot pureé so I gave it a little bit of apricot extract that I had left over from a beer I brewed for a friend. 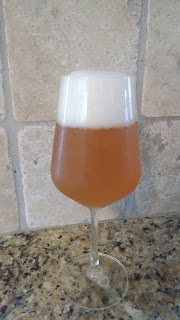 Appearance: Pours a hazy light orange with chunks of apricot pureé topped off with a tall fluffy white head that slowly fades to a thin lacing. The only thing I would like to change from the appearance would be the apricot bits, but that’s an easy fix, don’t use pureé.

Aroma: Up front there is a potent apricot aroma, mostly from the extract, but it doesn’t come off as a fake aroma. I get some lactic sourness in the nose as well as a bit of mango. The apple character that I get from the Bernice version has either faded with age or is overwhelmed by the apricot.

Taste: Lactic acidity, a hint of green apple and citrus. The funny thing is that the apricot comes across as more sweetness than acidity. I’m wondering if the pureé doesn’t add acidity like the fruit would.

Mouthfeel: Very effervescent with a clean acidity and dry lingering fruity finish. The carbonation might be a little too high, but nothing a little swirling can’t fix.

Overall: I’m very happy with how this beer turned out. Next time I’ll just use whole apricots I choose to do an apricot sour because I wasn’t too happy with the character, I don’t like using extract, and I don’t like all of the residual pureé in the bottles. With all of the carbonation it makes it look like a snow globe. It’s no West Ashley, but it’s still very enjoyable.
Posted by James at 10:42 AM