The beer that I drink is usually determined by the seasons, but luckily as a home brewer I’m able to avoid seasonal creep (Oktoberfest beers in July). Now that it’s “fall” in Texas I’m starting to want something that’s a little darker, however, since its fall in Texas it’s still in the 90s. Something like breakfast stout is too much for the weather currently, but it will start to cool off eventually, which makes porter perfect. The only real thing that differentiates porters from stouts is the lack of roasted malt, but they are generally considered to be a little dryer and less astringent. For my porter I’m planning on something medium bodied with chocolate characteristics that I think will work well with the coffee addition. A friend of mine who I’ve brewed with before has been telling me for months that I should do a coffee porter and add lavender to it. I’ve only had a few beers that have used lavender in the past and they were all soapy. It’s a difficult spice to use and you have to tread lightly. My plan is to soak some lavender in vodka and add it at time of bottling. I’ll probably only add the lavender to a gallon or two of beer, since I’m not the biggest fan of lavender, but I always like a challenge and to experiment. 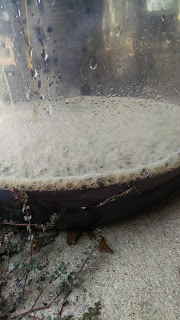 My brew day was surprisingly easy, but it’s times like this that I wish I had a secondary fermentation chamber. Since I use my chest freezer to ferment and serve beer, I can’t use it to drink from for a week or two during fermentation. I just need to borrow a pickup truck to get a second fridge. For the time being, no pale ale for me. The only issue that I encountered was post brewing. My plan was to just pitch the yeast slurry I had in the fridge and not make a starter the night before, assuming there would be a high enough cell count in a thick slurry. I completely forgot that my 1056 slurry was washed twice to remove hop particles so it’s pretty thin. I pitched both jars, but it still took almost 36 hours to see signs of fermentation.

Most of what I did during brewing was based off of my Breakfast Stout Clone including, water adjustment, mash pH, and coffee addition.

10/5/15 – Fermentation finally started, temperature was raised to 66oF earlier in the day.

10/19/15 - Had to dump the batch. I think during the time it took for fermentation to start some bacteria or wild yeast took off and added acidity. That's the risk you take when you brew with bugs.

11/1/15 - Removed from chest freezer and left at ambient temperature in beer room.

11/8/15 - Removed coffee from the keg and set carbonation to 25psi to carbonate.