Surprisingly it’s still hot in Texas even though it’s fall, which means there is still time to brew an APA. As much as I like IPAs they are stronger and generally not as thirst quenching as a lower gravity less hoppy beer. I’ve been listening to the Brewing Network for quite some time now and have always thought about brewing some of the brewcasters recipes, but generally end up doing something else. Most of my brewing is taken up with continuing my sour pipeline and keeping my barrel topped up. Finally, however, I had open carboys and a chance to brew something different. This, I figured, would be the perfect time to try out Tasty’s APA recipe, as well as, getting back to brewing 100% Brett fermented beers. 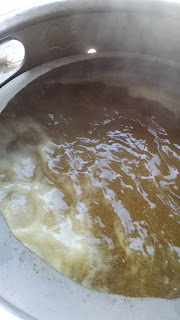 I used to brew 100% Brett fermented beers fairly often and I’ve always been an avid supporter of Brettanomyces as a primary yeast strain, but I’ve slowly over time moved away from using it as a primary yeast. Generally I ferment my Brett beers with a single strain, but this time I had a bottle from Wicked Weed, which I knew contained 4 different Brett strains. I have no idea what strains they are, but I personally think Brett is better when used as a blend rather than a single strain. I feel that single Brett strains are usually pretty straight forward in one way or the other so they need other strains to add complexity. If you look at some of the other yeast providers on the market (ie not Wyeast or White Labs) you’ll find offerings of Brett blends along with single strains. The blends usually contain strains selected because the complement each other and add complexity.

Unfortunately this won’t be a true side-by-side because I didn’t have a way to control the fermentation temperature of the Brett version. I only had room in the chest freezer for the 1056 version that I was thinking about entering competition. Fermentation for 1056 was pretty vigorous and even blew off the airlock in my chest freezer. I was in Austin during that time so I had no idea until I got back. I wasn’t particularly worried since it was still fermenting and would have pushed anything out of the way before it could get to the actual beer. This is where things got a little weird. The Brett version had a 48 hour lag, which doesn’t surprise me because that’s normal for Brett; after a week I thought it had finished or at least slowed to the end of fermentation. I added one ounce of Cascade since I had to use an extra ounce during the boil. I went to get more hops the next day (ended up getting an ounce of Galaxy because they were out of Cascade), but by the time I got back the beer had started to ferment again! This time it was much more vigorous. I let it continue for another week before it looked like it settled down and I took a gravity reading. I’m not really sure what caused it to stall and restart, but it finished pretty dry. 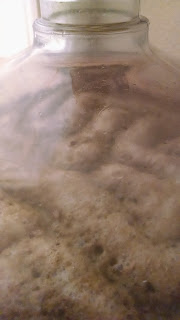 Notes:
9/4/15 – Brewed by myself. Added 6 grams of CaCl and 4 grams of Gypsum to the mash along with 8.7 grams of CaCl and 5.8 grams of gypsum to the sparge water. Mash pH came in at 5.33, which is what I was targeting. I decided to try cold sparging this time to see if it made any noticeable difference in efficiency. I figured if it didn’t it would be nice to not heat my sparge water in the future and save the time and propane. I came a little over my target gravity and didn’t really have any room in the kettle to lower the gravity. Instead I just adjusted my hopping in an attempt to keep the IBUs similar. Chilled wort to 65F and aerated the clean half with 45 seconds of O2 placed in the chest freezer at 65F. Fermentation kicked off later that night for the clean version.

9/6/15 – Fermentation for the Brett version kicked off

9/9/15 – Added dry hops to the clean half at the tail end of fermentation.

9/11/15 – Fermentation restarted for the Brett version.