I wanted to rebrew one of my favorite beers I’ve brewed to date over my winter break. I’ve brewed this beer a few times and the last time I felt it was almost perfect. It even won a bronze medal at Bluebonnet Brew-off last year. I figured it should be pretty easy since I’ve brewed it with success in the past: famous last words. This post will contain two different process because the first time I skipped a step and the beer was contaminated and the second time I had other problems. 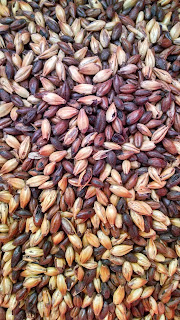 The first batch didn’t start off well from the very beginning. I made a starter for my yeast, which apparently was very fresh and resulted in a blow over on my stir plate. This had me worried for potential contamination and by looking at I could tell something was wrong. I made the mistake of not replacing the yeast and rolling the dice, hoping it would be fine. It wasn’t until the end of fermentation that I could tell something was off. The beer finished drier than I wanted and there were some funky notes. Rather than dump the whole batch because it was drinkable, just slightly off I decided to add a different coffee that I have and brew the beer again, while taking extra care to prevent contamination. On top of that I forgot to add part of the chocolate during the mash, so I added it all at the end of the boil (and for some reason I used 2 ounces instead of 2.5 ounces…and no I wasn’t drinking during brewing).

Batch two started off the same way. I made a starter, but became concerned with the look of it. This time I decided to not risk my beer and bought some US-05, since I had to go to the homebrew store and get extra grain anyway. Looking at my starter, which has been sitting there for over a week, I think it would have been fine. There doesn’t seem to be an infection like I feared. I boiled my flask and sanitized with Starsan prior to adding the starter media, so an infection seemed unlikely. Back to brewing, the first batch and this batch experienced the same problem; both were under my target pre-boil gravity by about a full 10 points. I added DME the first time to correct and this time I extended my boil. Shockingly each time at the end of my boil my final gravity was almost 10 points too high! Something is off with my system, calculations or measurements. I need to figure out what my problem is next time I brew. On top of this problem, I ran out of propane 30 minutes into my boil. Thankfully I wasn’t going to add hops until 60 minutes and I was planning on extending my boil to condense sugars. I covered the pot and ran to get propane. I started from that point and boiled an extra 15 minutes, then added the hops. I checked the gravity with about 10 minutes left and discovered it was well over my target so I started filling up water need to lower the gravity and added it to the wort with about 5 minutes left. During all of this commotion, I forgot to add the last 0.25 ounces of hops.

It seemed the world did not want me to make these beers, but now I have 10 gallons. 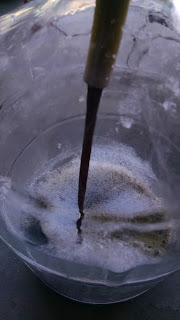 1/4/16 – Temperature increased to 70F to finish out fermentation.

1/6/16 – Rebrewed my myself to attempt a good batch. Same process as the last one, however, I remembered to add 1.5 ounces of chocolate powder at the end of the mash and I added 5 ml of lactic acid. The ph was measured at 5.6 this time. Chilled to 70F and oxygenated with 90 seconds of pure O2, then placed in my downstairs bathroom which was 58F ambient.  Pitched yeast about an hour after.

1/7/16 – Fermentation started and the temperature remained 58-60F the whole week.