I’m a little late on this review, but with travel and the holidays, which were full of brewing and blending, I just haven’t had time. In my on-going quest to fine new fruits to add to my sours, I landed upon blueberries. Normally I don’t like the idea of blueberries in sour beers, even though beer nerds always lose their mind over them, because blueberries as a fruit don’t have much flavor. Generally they are just tart when young and sweet when they ripen. The main contribution of blueberries comes from the color in their skin. The reason that I chose to go with blueberries is simple: they were on sale and I had beer ready. 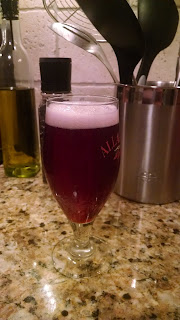 Appearance:  Pours a slightly hazy strikingly blue-purple with a light pink-purple head that fades pretty quickly. As the beer warms up it clears up as well. This is by far the most interesting looking beer that I’ve brewed.

Aroma: The aroma comes across as honey and mead like with some lactic acidity. No malt or hops present.

Flavor: Up front it’s mostly a clean sourness, not much berry flavor with a slightly sweet cereal like finish. That should eventually fade with time.

Overall: I stand by my beliefs that blueberries don’t add anything meaningful to a beer except for color. If you gave me this beer and I couldn’t see it I would have a hard time telling you that there are blueberries in the beer. If they weren’t so expensive most of the time I think they would be a nice addition to a lightly sour beer to increase the sourness and give an interesting color, however, I would dry hop the final product to give it a more interesting fruity aroma.
Posted by James at 10:14 AM