Although I like brewing different beers and trying different brewing techniques, I still feel your skill as a brewer on the technical side comes from your ability to replicate past batches. In the past I’ve attempted to rebrew a few different things with varying degrees of success. I fell I did a better job this time; however, there were some issues. The first batch showed signs of infection so I decided to brew the beer again a week later. I’m amazed how each beer turned out considering the problems I had with each of them.  That being said, it makes me respect professional brewers even more with their ability to brew the same beer over and over, while maintaining the same flavor.

Appearance: Pitch black with a hint of brown around the edges with light shining through, topped with a dark tan head with moderate retention.

Aroma:  Roasted and burnt aromas and coffee. Not much chocolate or hop aroma. I’m guessing the burnt notes came from the fact that I used dark roasted coffee, instead of my usual light roasted coffee. 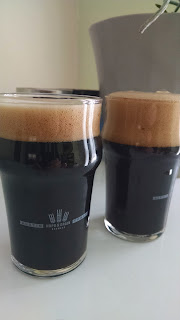 Mouthfeel: Creamy full bodied with medium-high carbonation and a burnt astringent finish. I should lower the carbonation, which isn’t a big deal. I like the mouthfeel, even though it finished dryer than I prefer, however I don’t like the bitter burnt finish.

Overall: I don’t know how much the possible Brett infection made a difference, but I can say there are differences from the other batch. There are no apparent off flavors from Brett, but there are other issues, such as the burnt flavor and astringency.

Appearance: Pitch black with a hint of brown around the edges with light shining through, topped with a dark tan head with moderate-poor retention. My guess is that the coffee or chocolate is the cause for the head retention issues. I might through in some Cara malt or Wheat to improve it next time.

Aroma: Mocha, coffee, dark chocolate, caramel , and a hint of roast. I’m happy with the aroma, however, I might want more coffee. The coffee that I used was a different origin from the last time I used Intelligentsia coffee.

Flavor: Dark chocolate, coffee, roast, a hint of astringency and medium high bitterness. Clean fermentation profile, no detectable off flavors other than the astringency, which could have come from the coffee.

Mouthfeel: Medium carbonation, maybe a touch too high, medium to light body, definitely too thin, with a dryish slightly astringent finish. The mouthfeel is probably my least favorite part of this beer.

Overall: It’s not that this is a bad beer, but it’s not as good as the last time I brewed it. It’s lacking the same full bodied mouthfeel, which could have come from my mash temperature; however, I used the same temperature as last year. Compared to other times when I try to rebrew a beer, this one did turn out better than in the past. Its close, but it could be better.  I will say though, with its lighter body and higher carbonation, it’s dangerously drinkable for 9% ABV.

Edit: I took a gravity reading with my hydrometer to confirm the final gravity. It turns out it finished closer to 1.018, rather than the 1.014 like I thought. It still isn't as creamy as I wanted, but it's not as thin as my mind was making it seem.

Between the two, I wonder what it would be like if I had added the coffee at the same time and used the same coffee. On the flip side, I can see some differences between the two, from just those issues, since I can’t see much of a problem with Brett. I know it’s there, because I could see it during fermentation, but I’ve been able to keep it cold, which probably minimizes any affects.
Posted by James at 6:19 PM