The first time years ago when I had a Heady Topper it blew me away. Unlike the West Coast styles of IPA I was used to drinking, it was hoppy and yet not overly bitter. Don’t get me wrong, I like bitter and enjoy West Coast IPAs, but this was something different. Recently there has been an explosion of these kinds of IPAs (hop flavor forward), many of which are coming out of New England. I personally enjoy because they are incredibly drinkable, despite their high hopping rate and ABV. In direct contract to their West Coast cousins, they are usually medium to full bodied, with a creamy mouth feel and often times very hazy, to the point of being opaque. There are many theories around the intertubes involving achieving the same level of haziness and its importance in the flavor and aroma of “New England” style IPAs. 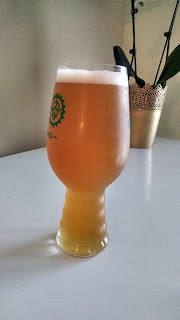 With all of the debate going on I figured I would go ahead and try and brew one for myself. I was targeting a hazy and hop flavor forward beer with a tropical fruit aroma. The most common term used to describe these beers is “juicy.” So that’s what I was going for in my hop selection. On top of choosing hops that are fruit forward I wanted to late hop the crap out of it to focus more on aroma and flavor.

Appearance: Opaque orange with some yellow hues, definitely turbid, topped off with a creamy white head that lingers and fades to a thin lacing on top of the beer. It passes the eye test for a NE IPA for sure. It is starting to clear up a bit now that it’s been in the keg a little while.

Aroma: Lemon lime, mango, orange, and a bit of the elusive berry note attributed to Mosaic. Lime is probably the most prominent aroma oddly enough. I’m disappointed that the aroma doesn’t burst out of the glass like some of the best versions I’ve had in the past, but my guess is because I chose not to dry hop again after fermentation was complete.

Flavor: Very minimal bitterness, much more fruit forward, citrus, berry, grapefruit, and mango round out the flavors. I would say it’s pretty juice forward with no real malt contribution.

Mouthfeel: Medium body with medium carbonation that provides a nice creamy mouth feel. Honestly if I was going to compare it to a commercial example I would say there is too much body. It doesn’t feel light enough. I might try next time to get the gravity down another two points to reduce some dextrins, while keeping the proteins from the oats for body. It finishes dry with no lingering bitterness. In fact it’s odd the way the bitterness just disappears on the palate.

Overall: For being over 7% ABV this beer is dangerously drinkable, without the lingering bitterness it keeps you coming back for more. There are a couple of things I would change, such as another dose of dry hops before kegging and after fermentation and maybe backing off of the Carafoam to dry the beer out a bit more, but other than that it’s one of my favorite IPAs I’ve brewed to date. I might increase the bittering just a touch, probably either through more extract or a slightly earlier hop addition. Right now it seems to sit right between IPA and Pale Ale.
Posted by James at 10:50 AM