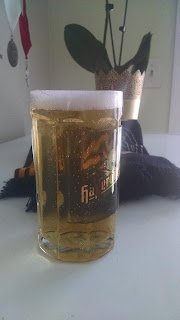 I’m still working on perfecting the perfect Pilsner. As I’ve mentioned before it is one of my favorite styles, especially in the summer. It’s a style that often gets dismissed by beer nerds in favor of big and bold flavors. I’ve noticed though, however, that the longer you’re a beer nerd the more likely you are to revisit beers you originally dismissed. As much as I respect the art of a well blended gueuze, I also respect and admire the brewing skill involved in crafting a great pilsner. It’s very easy to have one or more component out of balance. This was my second iteration of a pilsner and it was much improved from the last time. There are still a few adjustments that I’m going to make in the future; however, I feel I’m on the right track.

More to the point, I believe the quick lager method was a success. I couldn’t discern any yeast produced off flavors and the beer turned out clean and clear in a short amount of time, requiring no lagering. This will be my method in the future for sure. I’m curious if it can be replicated with other lager strains or if it is unique to this specific yeast strain.

Appearance: Straw yellow with brilliant clarity (thanks to the fining agent) and topped off with a white heat that shows some good retention and clings to the side of the glass.

Aroma: Spicy and grassy hop aroma with a touch of bready malt. Clean and no signs of diacetyl or sulfur. 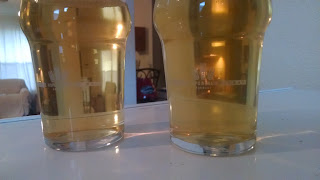 Mouthfeel: Light bodied and medium-high carbonation that causes a prickling sensation on your tongue with a dry clean finish with a mild lingering bitterness.

Overall: I would say it was a success overall. There are a couple of things I would change next time. I would add a touch of melonoidin malt to enhance the bready flavor and cut back on dry hopping. I might also change the choice of hops to a more tradition aroma hop. On top of that the bitterness comes across as a little strong and I think that’s because of the hop extract. I would eliminate that next time and go for a traditional noble hop, perhaps even use first wort hopping. Over time, and with the increased availability, I’ve been drinking more Live Oak Pilz, which I already really enjoyed and I think my palette has begun to shift away from Pivo Pils to LO Pilz. At the end of the day if I could make anything close to either of those beers it would be a resounding success.
Posted by James at 10:14 AM