If you actually read my older post you’ll see that recently I’ve been on a kick of brewing “New England” style IPAs. I’ve always like fruit forward IPAs and NE IPAs encapsulate that better than their west coast brethren. That being said, one issue with NE IPAs is the alcohol content. Although they don’t drink their ABV, they do contain a fair amount of alcohol, which isn’t necessarily a good thing when you’re trying to be productive during the day. I’ve also mentioned my continued drive to prove that what makes NE IPAs different is hops and yeast selection, not a special water treatment or grain bill, so this beer is a part of that experiment, without being a true comparison (so take it with a grain of salt). 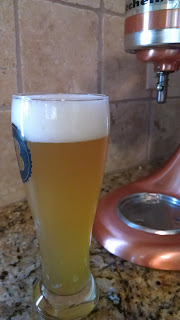 I did not use the same hop bill as I’ve used for my other attempts at an NE IPA and opted to go for a single hop Galaxy pale ale. Galaxy hops are known to produce tropical fruit aroma and flavor, which I felt would work well with the London ale III yeast. One of the main differences between this beer and my other NE IPAs is the exclusion of flaked oats. I followed a similar hopping pattern to cut down on some of the variables.

Appearance: Murky, hazy, pale yellow with some orange hues and a creamy white head that clings to the side of the glass and leaves a lacing on the top of the beer. Good head retention.

Aroma: Grapefruit up front with some underling tropical fruit notes, I would probably describe it as peach like aroma. Definitely not as tropical fruit forward as my other attempts, however, it is a similar aroma that I’ve had from Galaxy in the past. At this point I’m convinced it’s an expensive Cascade.

Flavor: Grapefruit, citrus, lime, with a touch of bready malt. The bitterness is a little strong for a pale ale in my opinion and with the dry finish it’s more apparent.

Mouthfeel: Light bodied, crisp mouthfeel with a dry finish and lingering bitterness. It lacks the creamy mouthfeel you get from flaked oats. That’s not a bad thing, but it does lead me to believe that they are more important than water treatment and yeast selection when it comes to mouthefeel. The bitterness is a little strong as well. I probably should have removed the initial hop extract addition since I reduced the grain bill.

Overall: This is an enjoyable beer, which is easier to drink multiple glasses while remaining functional. As far as the experiment goes, from what I can tell, hop selection makes a big difference when it comes to obtaining tropical fruit aroma, yeast selection causes the beer to be hazy, not grain bill or hop schedule, and flaked oats provide a silky creamy body, which cannot be achieved with water treatment and yeast selection alone. I wasn’t actually happy with this beer as a pale ale, because it’s too bitter. However, the more I thought about it the more I realized what it is in fact is a session IPA. I will admit that makes it a failed pale ale, since that was my goal, but I can enjoy it more by thinking it’s a session IPA. I normally don’t like session IPAs because they lack body and taste like hop water. Happily this does not. I will also add that this beer adds to my belief that single hop beers are not as good as using multiple hop varieties. Single hop beers are good for learning the character of a hop, but you can't achieve the complexity as you can with multiple different hops.
Posted by James at 8:21 AM