I’m finally getting around to writing up the first tasting for this beer. The tasting happened a while ago, but luckily I took notes. I brewed this beer for wedding favors for our wedding (which is also why it took me a while to finally write a review). I’ll try to write a review for the MicroIPA but there is not much left in the keg, I guess it was popular. I only had one glass of it that night and enjoyed it. Everyone that had some told me they really liked it, I guess they could have been being nice to me since it was our wedding after all. If you have forgot the Wedding Saison was actually a double brew. The first batch was infected and it forced me to brew a second batch. I changed what I planned to brew for the second batch and made it a little closer to what was the “theme” of our wedding.

Appearance: Hazy reddish-orange with yellow hues and a thin white head that quickly dissipates into a thin ring around the side of the glass. The hibiscus definitely added some color. Prior to its addition the beer was a pale yellowish-orange.  There are small particles floating around in the bottom of the glass, which I’m assuming are the elderflowers. I’m not too worried about it since this was the last bottle and got the majority of the gunk at the bottom of the carboy.

Aroma: Slight tart cranberries, very floral, with notes of citrus and spice. I like the spice from the Saison yeast. I was worried that the elderflowers would be too over powering but I guess one ounce per 5 gallon batch was just enough. You can tell they are there but they are not screaming in your face and they didn’t give the beer a green pepper taste that Mamouche can have sometimes.

Taste: Spicy and yeasty with a subtle tart cranberry taste. The elderflowers didn’t provide any taste which was good; I was also worried about that. I’m glad that the hibiscus was not overwhelming. I wanted it to be a hint of hibiscus tartness to make the beer refreshing without it being too tart for people that are not used to that kind of flavor in beer.

Mouthfeel: Medium body with a dry refreshing tart finish. I love Saison yeast because they will dry a beer out without making it feel watery. So far it’s a little under carbonated but I did try this beer after only one week. I’m assuming with more time it should hit just the right amount. I’ll have to try another bottle later to confirm. 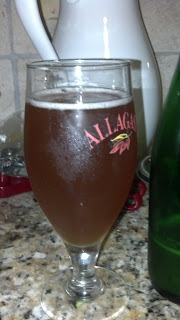 Overall: I liked the beer a lot and will probably brew with hibiscus again. I might increase the amount I use next time since I like tart beers. I could see it working well with a Berlinerweis or a Tripel. I had to try this beer early to make sure it wasn’t infected like my last batch. There may or may not be Brettanomyces in it but I’m willing to let that go. If there is Brett in the beer it should add a nice extra layer of complexity to the beer for those willing to wait on it for a while. There shouldn’t be any chance of bottle bombs since they were bottled in strong Belgian bottles. I’m looking forward to trying this beer in the future to see how it has progressed.
Posted by James at 11:59 AM