This is my third attempt at a 100% Brett IPA. So far I’ve brewed with Brett-C and Brett-Brux Trois. Each batch has been different and successful. There are a lot of myths and confusion when it comes to Brettanomyces. Many people associate Brett with sour but the truth is that Brett will not sour a beer on its own. It can produce trace amounts of acetic acid in the presence of oxygen but not enough to produce the levels of acidity that are commonly associated with Brett. I think most people are not aware that Brett can fully attenuate a beer and can ferment it clean as well. There are a few examples of 100% Brett fermented beers on the market, BRUX from Russian River and Sierra Nevada and Mo Bretta Brett from Lost Abbey and New Belgium. The majority of 100% Brett fermented beers come from Crooked Stave. For the most part though, they are hard to find.

For my third installment I’m using yeast that I got from BKyeast called C2. It was Brett that he isolated from a Cantillon Iris bottle. It is best described on his website but many people note fruity aroma from this particular strain. I would have to agree with that assessment based off of the aromas emanating from the starter. The biggest aroma that I noted was peach. 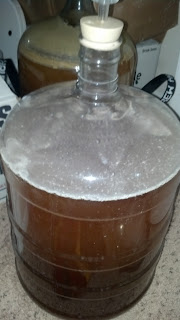 I decided to rebrew my last Brett IPA that way I would have some way to compare the characteristics of the new yeast strain. Part of my procedure did change from the last batch. This time I decided to ferment the beer outside of my chest freezer in hopes of stressing the yeast to cause it to produce more esters. I also took more notes during the fermentation to note any interesting developments.
Stats
Original Gravity: 1.050
Final Gravity: 1.014
Estimated IBU: 70
SRM: 3o
ABV%: 5.2%
Efficiency Est: 65%
Boil Time: 60 min

Recipe
Hops
Yeast
Mash
Mashed single infusion for 60 minutes at 153oF, single  sparge at 170oF

6/26/13 - Turned stir plate off. Pellicle formed.
6/29/13 – Brewed by myself. Easy brewday, no problems. For the mash I added 3 tsp of gypsum and 1 tsp of Calcium Chloride and 2 tsp gypsum and 1 tsp Calcium Chloride to the sparge water. Measured OG was 1.055/ Chilled to 80F and pitched yeast with minimal aeration and moved the carboy upstairs to ferment in ambient temperature of 75F.

7/1/13 – The pellicle is thick now and has trapped large amounts of CO2 forming large bubbles.

7/3/13 – The krausen has disappeared but there appears to still active fermentation.

8/7/13 - First tasting. Disappointing from the stand point that I didn't end up with what I wanted, but not that bad.
Posted by James at 8:56 AM