I had some time off from work a little while ago and finally got to do something that I’ve wanted to do for a while. I was able to brew at a professional brewery. I’ve wanted to do that for a while because like most home brewers I dream about opening my own brewery someday. I knew that just because I can home brew does not mean that I have any idea how to handle a professional brewery. 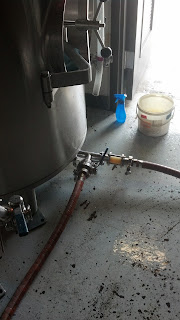 The day started at 8:00 AM with crushing the grain and mashing. Their operation is a two person operation because their mash tun does not have a stirrer. I was stirring the grain as it reached the mash while the assistant brewer loaded the grain into the hopper. The first 10-15 minutes after I arrived I spent trying to learn how to not be in the way. They have a very tight space in their brew house. Basically enough room for the equipment and two brewers, not much more than that. So I was trying to learn how to stay out of the way and move around the brew house.

Overall it was not too different from homebrewing. It’s the same basic process just on a larger scale. The nice thing was there was actually probably less manual labor involved in professional brewing then there is in homebrewing. Until I can get a pump I’m stuck having to lift and pour multiple gallons of water. Whereas, a professional brewery is dealing with hundreds or thousands of gallons of water, they have pumps that can move it from place to place. Most of the work involved was cleaning the mash tun after mashing. All other cleaning activities at the end of the brew day were performed by pumps and the kettle. 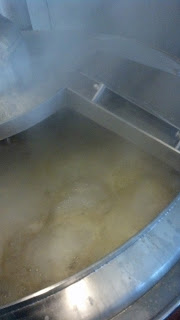 One of the things that I would like to improve in my own brewing is monitoring different aspects during brewing. I generally add the grain and water and hope that everything is doing what it should be doing. I monitor time and temperature but I don’t really measure any of my hops since I don’t have a scale. I also don’t measure my mash pH. A professional brewer is constantly taking measurements during brewing to confirm that everything is working according to plan. If something is not how it should be they have time to correct it. For me if something doesn’t work out I’ll probably still make a drinkable beer or at worst I’ve wasted $50, but for a professional brewery they need to make their recent batch taste just like their last batch and they are dealing with a lot more money per batch. 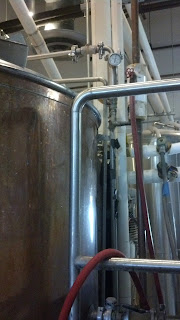 Overall it was a great experience and I’m glad I finally was able to see what profession brewing was like. I now know that it is something I can probably handle and am more interested in learning and improving my own brewing process. The biggest thing that I want to stress about professional brewing is that it is still manufacturing. We as ‘beer nerds’ tend to glorify brewing and brewers. But at the end of the day it is a manufacturing facility. If you are not careful you can be seriously hurt. Throughout the day you are moving hundreds of gallons of hot near or boiling water around and dealing with acids. There are a lot of ways to hurt yourself. If you are ever able to work in a professional brewery make sure to keep that thought in mind.
Posted by James at 12:14 PM