This review has been a long time in the making. I kegged the beer a few weeks ago but was not able to open the keg to add the second dry hop addition and remove the old hop bag because it was pressurized. Normally I would just open the pressure release valve and the open the lid but I couldn’t do that because every time I would open the pressure release valve it would foam out. My solution was to place it into the chest freezer and chill it to reduce the pressure. I think it became so pressurized because the yeast continued to ferment even though I thought it was done. I knew that was a risk but I was willing to overlook it because I thought I could just release the pressure. 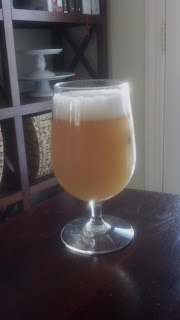 Well after a week in the freezer it still was foaming out, so I hooked it up to my faucet and began to pour the foam out a little bit at a time. That didn’t stop for a week and I couldn’t figure out why. I researched that symptom and found that the liquid lines shouldn’t drop below the liquid output that much. As soon as I placed it on top of the other keg the problem was solved and it poured normally. I’m still learning about my kegging system.

After I was finally able to degas the keg I removed the old hops and added the fresh Citra hops in a bag to the keg.

Appearance: cloudy, milky pale yellow with orange hues on the edges. It’s topped with a thick creamy head about two fingers thick that slowly fades to a thin lacing over the top of the beer. I’m not sure if it’s this cloudy because I’m pouring from the bottom of the keg still or if the yeast is just a really poor floculator. I’ll probably know in a few weeks.

Aroma: The aroma has changed over a few weeks. When I initially smelled the beer prior to placing it into the keg it was full of fresh strawberry aroma and citrus. After a week in the keg it became a big woody, cheesy, acidic mess, which of course had me worried. I’m happy to say that now it has balanced itself out. It’s a combination of orange peel, coriander, citrus, melon, a touch of acid, some nice funk, horsey, and a bit of strawberry.

Flavor: I think most of the flavor is derived from the fact that I aerated the wort prior to pitching my yeast. Normally I would not aerate wort if I’m using Brett as the primary strain since it can produce acid in the presence of oxygen. I basically accidently shook the carboy because I was in auto pilot at that time. Needless to say you can tell that there is acid in the beer. The flavors are citrus and orange with some ethyl acid and a touch of funk.

Mouthfeel: Medium high carbonation with a medum body and a dry lingering acidic finish. I like the carbonation level but I’m not a fan of the body. I would have preferred it to finish dryer.

Overall: I can’t say I’m disappointed with the beer because it’s not really bad it’s just  not what I wanted. I’m happy that I didn’t get a bitter/sour mess by brewing an IPA and aerating the Brett. There are aspects that I would do differently next time i.e. aeration, but I would probably also try to dry the beer out more, maybe mash lower or add some sugar, or perhaps less wheat. I’m definitely going to rebrew this beer and do it correctly next time.
Posted by James at 9:24 AM