Well it’s been a long time since I’ve posted anything new. It’s also been a long time since I’ve been able to brew. Recently it hasn’t necessarily been because of lack of time. It has mostly been due to lack of carboys. I currently have 3 carboys with beer souring in them and one with Brett doing its thing. My only available carboy is a Better Bottle that has been used for Brett fermentation. 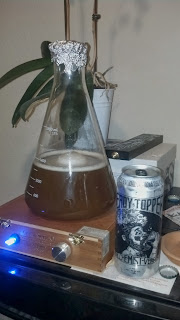 I also recently went on vacation with my wife to New England. While we were in New England we went to Hill Farmstead and to the Alchemist. Since we were able to go to the Alchemist early Monday morning I was able to get some super fresh cans to bring back with me. About a month ago I received some cans in a trade and attempted to culture the yeast. In case you don’t know the Alchemist uses a proprietary yeast strain called Conan. This particular yeast starter began fine. But after I stepped it up I noticed that a pellicle had formed on the top.  My initial reaction was that it was probably because I was maybe not as sanitary as I should have been while pouring my step up. But then I thought about it longer and the infection probably originated from the stir bar. I’ve used this stir bar and flask for a 100% Brett culture. Even though the stir bar is food safe it can still be porous because it’s plastic. In order to avoid an infection this time around I soaked my flask and stir bar in a solution of bleach and water for 48 hours. Then I used a sanitizer twice prior to use.

I started with a 0.5L starter at 1.040 and used two cans for the yeast. I opened one can and poured 75% of it into a glass then swirled the can and dumped it into the starter wort after flaming the lip of the can. Later after I finished my glass I repeated this procedure. The starter never really showed any signs of fermentation and I was a little worried but I decided to step it up regardless. I chilled the wort and decanted the top off, there was a small layer of sediment on the bottom so I had hopes. I stepped it up with 1.5L of 1.040 wort and placed it on the stir plate. After about 36 hours the first signs of fermentation were starting to show and a small krausen formed. After 48 hours the krausen had risen about half an inch up the side of the flask with no visible signs of infection. Hoping to be able to brew and not infect the actual beer I proceeded with the same steps to sanitize the carboy as I did with the flask. I poured a mixture of bleach and water into the carboy and let it soak for 48 hours then sanitized as usual. Fearing infection again I made sure to give it a sniff test (although unofficial it’s better than nothing) and I noted that the starter smelled of DME and hints of peaches, which is often described as Conan yeast.

The plan is to eventually brew a Heady Topper clone, but in order to do that I want to make sure I have enough yeast so I’m brewing a pale ale as an experiment first then I’ll use the yeast cake for the Heady Topper clone. I was able to find some Galaxy hops online and since I’ve wanted to try them for a while I bought them and decided to do a single hop pale ale with the Galaxy hops. The recipe and notes are below.

Notes:
(9/28/13) – Brewed by myself.  I added 1tsp of Gypsum to the mash to get the sulfate content up a little. The brew day went smooth until I noticed that the plastic lines in my wort chiller had what appeared to be mold growing inside them. I quickly removed them and used some extra lines I had to replace them and then sanitized the whole system. Chilled the wort to 68F and shook to aerate then pitched my 1.5L starter. Set chest freezer to 62F.

(10/01/13) – Increased temperature to 68F. Krausen is about 1.5 inches thick and is a tan color with clumps on top, looks like a normal fermentation.

(10/09/13) - Gravity down to 1.008 racked to the keg and set the pressure at 30 psi and shook. Placed into the chest freezer and turned the pressure down to 14 psi and the temperature at 42F. I'm worried that my initial gravity was too low and there won't be enough balance. I left the yeast cake in the carboy for the Heady brew. Lots of peach and passion fruit aromas though.