I documented some of the issues with my pale ale in the brewing post. When I took a gravity sample and tasted it I was worried it was going to be ruined. It seemed way too bitter and was lacking mouth feel. I figured I would at least give it a chance to chill to serving temperature and carbonate. Well I’m happy to report that the carbonation and chilling helped dramatically. This is probably one of the best IPA (I say that for a reason) that I have brewed to date. 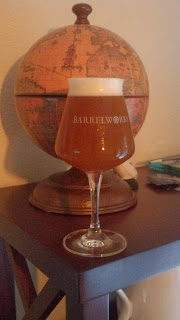 Appearance: Honestly this is an ugly beer. I couldn’t really convey the actual color in the pictures but it is a brownish orange that is completely opaque with a creamy white head about 2 fingers thick that slowly fades and clings to the side of the glass. In the picture it is more brown then orange but I assure you it is more orange in person.

Aroma: The aroma gets big points. Big burst of grapefruit, orange peel, peach, passion fruit, and mango. I’m surprised that the Conan yeast didn’t produce as many peach esters as other people have described but I did ferment it rather low. I decided to ferment it at a higher temperature for the actual Heady Topper clone; hopefully that was a good choice. The predominate aroma is orange for sure, which did surprise me since I had not read of Galaxy hops producing that aroma.

Taste: Big time grapefruit and orange in the flavor. In fact with the aroma being dominated by orange I was first tasting orange as well but it is far too bitter to be orange. There is a subtle peach flavor which I’m attributing to the Conan yeast. My biggest fear was that the beer would be too bitter and unbalanced, which it is, but if you shift your expectations from Pale Ale to West Coast IPA then it fits the style perfectly. The bitterness is aggressive and lingering. This is definitely a pallet obliterator.

Mouthfeel: Medium body with a nice medium carbonation and a creamy mouthfeel. My worry of a thin mouthfeel was removed by the Conan yeast. I’ve read that the reason Heady Topper has such a creamy mouthfeel is from the yeast and not from the addition of adjuncts. I’m willing to believe that. For what should be such a thin and light bodied beer it is not at all.

Overall: I’m very pleased with how this beer came out. Conan is pretty much steroids for hops. Although I vastly over hopped this beer it did not come out as grassy or astringent. And even though I under estimated my efficiency in using the no sparge technique Conan provided enough glycerol to give it a creamy mouth feel. As a Pale Ale I have failed, but as an IPA I have succeeded. The only thing that would keep this beer from being an IPA is the fact that it is about 3% ABV. Things I would change for next time would include, increasing the amount of grain so that my first runnings are a higher gravity, use or borrow an immersion wort chiller so that I can cool to 180oF for a hop stand and not increase the bitterness, and ferment at a higher temperature to bring out the peach esters from the yeast. I’m still pleased with this beer. I like the fact that is like drinking an IPA but it is not 7% ABV.
Posted by James at 12:24 PM