This review has been about 2 years in the making. Two years ago I brewed a Saison, which I split at bottling. Half was bottled as a regular Saison and the other half was racked into a 3 gallon carboy and the dregs from a Russian River Temptation was poured into it. I let the carboy sit for about a year and then bottled it. The beer has been conditioning in the bottles for almost a year. 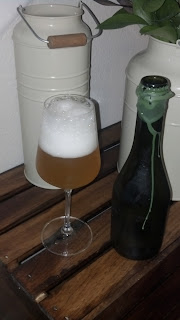 Appearance: Cloudy orangish-yellow with a fluffy white head that slowly fades to a thin lacing and clings to the side of the glass.

Aroma: Peach, tart apricots, some spicy Saison yeast remains, and some wheat notes with a hint or barnyard and acid notes. I’m pretty happy to see the Brett making an appearance; hopefully it will continue to develop over time. The aroma is best described as a Saison blended with Temptation.

Taste: Sour peach, spicy yeast, a touch of wheat twang, a bit of acetic acid and mustiness. I’m happy it ended up being sour. I was always worried about it never souring. The sourness is less than you would find in a bottle of Temptation but it’s possible that more time could have changed this. The flavor like the aroma is similar to a Saison blended with Temptation.

Mouthfeel: Very effervescent with a medium thin body and a lingering dry sour finish. I would say that it’s probably over carbonated, but for the style it might not be overall. This is the risk you run when dealing with Brettanomyces though. Nothing a little swirling of the glass can’t fix.

Overall: I’m very pleased with my first attempt at a sour wild ale. There are a few things I would change for the next time. I might let it sit a few months longer and sour a little bit more. Maybe 6 more months, but it was hard to since I was excited about it; however, now I have 20 gallons souring in 4 different locations so it should be easier this time. I would also probably not add as much priming sugar. I think the Saison was a good base beer, but next time I would also go with yeast that does not add as much special character to the beer, Ardennes would probably be a good choice. Regardless I’m very pleased with it and wish I had more bottles.
Posted by James at 9:14 AM