I’ve been delaying the review of this beer because I think it needed time to clean up. It’s still very ugly; visually that is, not flavor wise. I’m not sure how much it will clean up or if it ever will. As most people that have brewed with Conan yeast before or know anything about Heady Topper; the yeast have a very low flocculation rate. Maybe once I get through the bottom of the keg it will clear up a little bit but I’m not holding my breath. 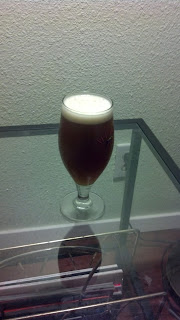 Appearance: Just like Lil’Heady it’s a murky brownish orange with a creamy off white head that lingers and clings to the side of the glass. I would say that Clone Wars does have more of an orange tent when held into the light then the Pale Ale version had but it still looks a little too dark. I’m not sure what would have caused the color variation. I would like to have a Heady (who wouldn’t) to compare it in the same glass just to see how far off I am.

Aroma: The aroma to me is pretty close to what I remember from the last can I had. There are some subtle peach notes with a hint of apricot. I think I may have made it a little too dank though. There is dankness everywhere in the aroma. I’m thinking the Palisade addition and the extra Columbus hops might have been a little over kill. It also could have been from the order when I added the hops. Next time I might add more of the Columbus to the first dry hopping addition so that it will have faded a little bit.

Flavor: This for me is the worst part of this beer. It’s too bitter. I’m assuming the reason it’s too bitter is because I came in under gravity. If you recall from my brewing notes, I brewed a 5.75 gallon batch with only enough grain for a 5 gallon batch. This was my fault for miscalculating my system. I attempted to make up the difference with DME but I didn’t have enough on hand. The flavor is dank for sure with a touch of peach. There is a slightly rubbery taste, which I can’t figure out where it came from. I read that you can get that flavor from either too much hopping or from yeast autolyse.  I can’t really see how the yeast could have started to autolyse since they were only separated from beer for a few days. The rubbery taste and aroma has started to fade though. Either the left over yeast are cleaning it up or it could have been me confusing it with the dankness of the hops that have faded a little.

Mouthfeel: The mouthfeel is pretty similar to Heady Topper, creamy with a lingering bitterness. I’m assuming I had a younger generation batch of yeast since I managed about 80% attenuation. My carbonation might be slightly too high, but that’s hard to adjust without having a separate CO2 regulator.

Overall: I’m pleased with how this batch turned out with all things considered. I’m going to have to brew it again for sure. I definitely want to hit my targets and make adjustments so that I can dial in the recipe. Looks like I need to trade for more cans of Heady for “research” purposes of course. I'm thinking next time I might adjust how I do the water profile. I'm starting to think that even if I blend my water with RO water its still too alkaline for an IPA. I'm probably going to only use RO water and add salts from there. I'm also thinking that Calcium Chloride plays a bitter role for hoppy beers then Gypsum, which is traditionally considered the mineral for IPAs. My reasoning for this comes from a quote from Shaun Hill where he expressed he prefers CaCl2 over Gypsum. If I do use my tap water in the future I will definitely use some acid malt or some other sort of acid addition to lower the pH. I plan on experimenting with this yeast a little bit in the meantime. I’m planning on a future brew day where I brew a black IPA with it and perhaps a few other experiments in the future.

Update: After researching my issues I think the problem was my mash pH. I thought about it and the best IPA that I've brewed was a Brett IPA, in which I added acid malt. In Texas I have really alkaline water so I think that adding the acid malt helped lower the pH to at optimal range. I did some calculations and my mash pH would have been pretty close to 5.9-almost 6 pH. This is way to high for mashing, where I would need 5.2-5.4. I also don't do anything to acidify my sparge water so I would assume that my boil pH is well above 5.1 as well. This would probably explain the harsh bitterness and lack of protein break to help clarify my beer a little.  I'm going to invest in some food grade acid for the next time I brew anything pale or hoppy and I need to finally invest in a mash pH.
Posted by James at 9:39 AM