As usual I’m slow to get around to writing reviews of my beers. I’ve been drinking this IPA for a little while now but it’s not old enough for it to suffer in any way. I wrote about the problems I experienced after dry hopping and attempting to rack to a keg. Basically I thought the yeast had crapped out because it was a commercial strain and on its fourth generation with me so for all I know it could have actually been at generation 24 overall. Even though I knew 1.023 was way too high and way under attenuated for this strain (I think it was a little over 54% at the time and it usually reaches 80-85%) I thought I could dry hop. I took two gravity readings over a week period and there was no change, even after I raised the temperature to 73oF. 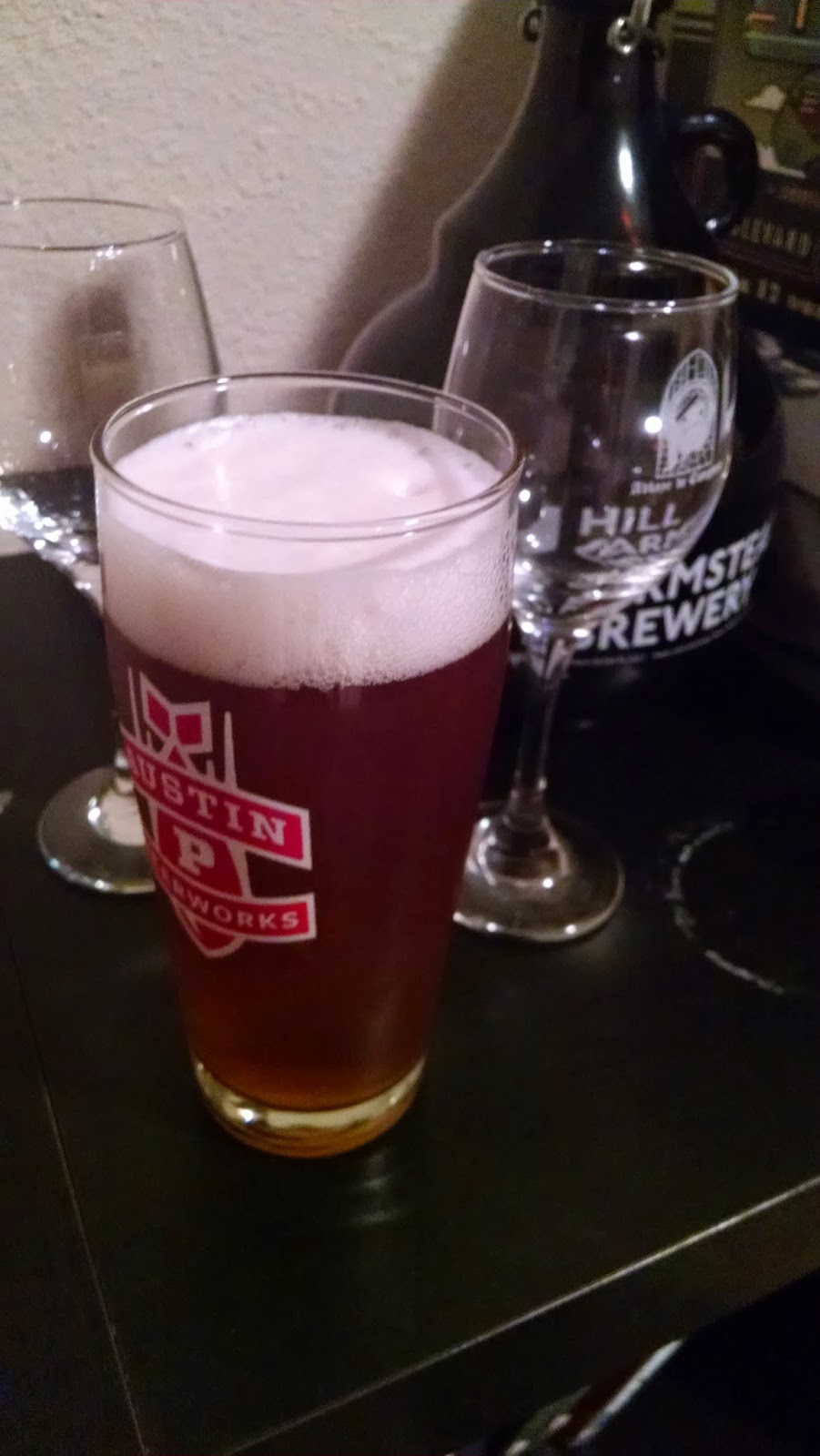 When I was prepping to get ready to rack to the keg for dry hopping I noticed a thin pellicle over the top of the beer. Normally it doesn’t bother me when there is Brett in my beers and I accept it as part of the territory when dealing with Brett as often as I do, but this was my only bank of Conan yeast and I didn’t have any cans of Heady Topper lying around. Since I had no idea what strain of Brett it was I was forced to dump the yeast cake. Racking into the keg and dry hopping as usual went well, but the real action happened when I went to rack the off the dry hops.

It turned out that they yeast in fact had not finished fermenting and by rousing it in the keg I had awoken it. When I opened the keg it began to foam everywhere and sprayed hop matter all over my kitchen. Over the period of a week I would go by every few hours and purge the CO2 from the keg through the release valve. By the time I got to keg it the gravity had dropped to 1.011, which is right where it should have been. I think I didn’t raise the temperature while fermenting soon enough and I may have started it too low in the beginning. Never the less it’s still an enjoyable beer.

Appearance: Hazy orange-yellow with a creamy white head that lingers and clings to the side of the glass. As the beer warms up the chill haze dissipates but the beer is still slightly cloudy, which is a characteristic of Conan yeast’s low flocculation rate.

Aroma: I think the aroma is more muted then I would have liked, especially given the total amount of finishing hops I used, but I think I blew a lot of the dry hop aroma out since the beer wasn’t finished fermenting and I had to purge it. Every time I purged the keg I could smell my dry hops going away. What I probably should have done in retrospect is a double dry hop to increase the surface area contact with the hops. The aroma is reminiscent of peaches, mango, berry, a touch of citrus, fresh cut grass and a bit of plastic phenols from the Brett.

Taste: Conan shines through on the flavor again providing that typical peach flavor along with that elusive blueberry flavor from the Mosaic hops. There is a slightly grassy finish and lingering bitterness along with a touch of plastic from the Brett again.

Mouthfeel: Again the Conan shines through providing a nice creamy mouthfeel to go with a dry finish and lingering bitterness. The carbonation is medium-high to accentuate the dry finish. I’m actually very happy with the mouthfeel of this beer.

Overall: I’m very pleased with this beer but disappointed that Brett got into it. I assumed it would since I didn’t do the best job cleaning a carboy that had just finished housing a sour, but I needed to put it somewhere. I’m also disappointed that it didn’t finish fermenting until after I dry hopped it since I lost some of the aroma and it prolonged my ability to keg it and thus I missed entering it into the homebrew store’s competition. At the end of the day I’m very pleased with it and unfortunately with all of the issues I only ended up with around 3.5 gallons.
Posted by James at 8:40 AM