In my usual fashion of wanting to try new brewing processes every time I brew I came up with a way to modify my IPA process. Most breweries use what is called a “hopback” for hopping their IPAs. Sierra Nevada calls it their torpedo system. There are hopbacks available for homebrewers to purchase but their somewhat expensive. The basic idea behind a hopback is that you run the beer across fresh hops after you have chilled it so that the beer is not extracting bitterness. Breweries usually place their hopback after their heat exchanger. Even if I did have a hopback without a pump it would be hard to use unless my system was gravity fed, which it is not. I want to increase the aroma I get from my IPAs but my options are limited to dry hopping and flame out hops. 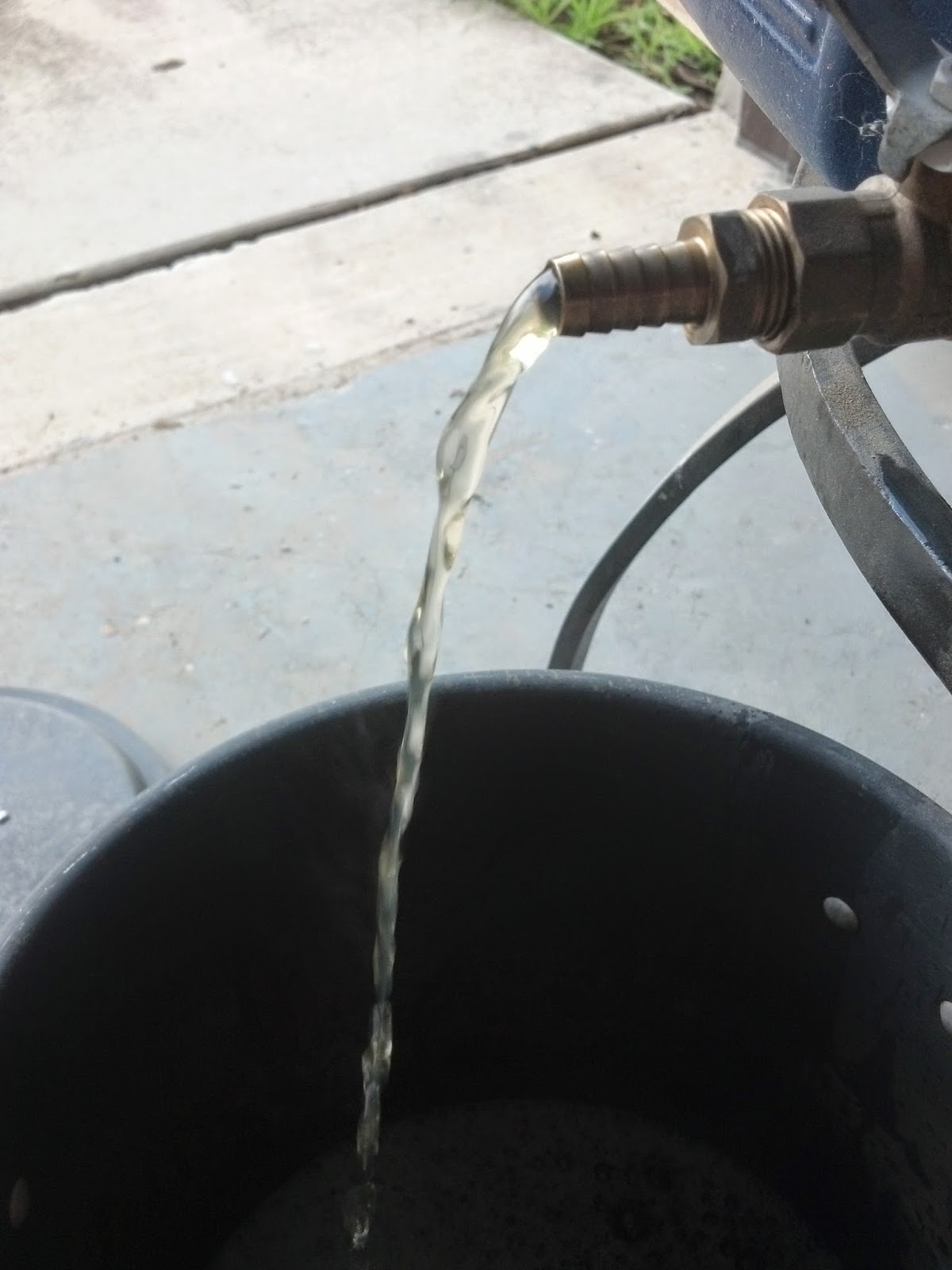 After thinking about it I came up with a way to produce, what I hope is a similar effect of a hopback, without having a hopback. Since I have a rather unique way of chilling my wort (filling a corny keg and using CO2 to push it through a jockey box submerged in an ice bath) I thought, why not have the wort go through only one coil in an ice bath to chill it a little and run the wort into a second corny keg filled with hops instead of straight into a carboy?

After preforming a 30 minute hop stand in the kettle at flame out I racked the beer into a corny and pushed it through one coil that was in an ice bath and the other that was sitting out in the air and into a corny keg which had a bag of hops in it. The wort was chilled to 105oF. I sealed it and let it sit for 30 minutes. Then I pushed the wort back through my jockey box and chilled it the rest of the way into a carboy. Hopefully this extra step of hopping will increase my aroma or at least give it an extra layer of aroma/flavor.

The only issue that in encountered while brewing was that my efficiency came way under what it normally does because my mash was too acidic. I definitely added too much acid malt. My calculation said it would end up around 5.2pH but I think once I broke through the buffering capacity of my water it dropped pretty rapidly. I’m hoping there will not be any acidity showing through. 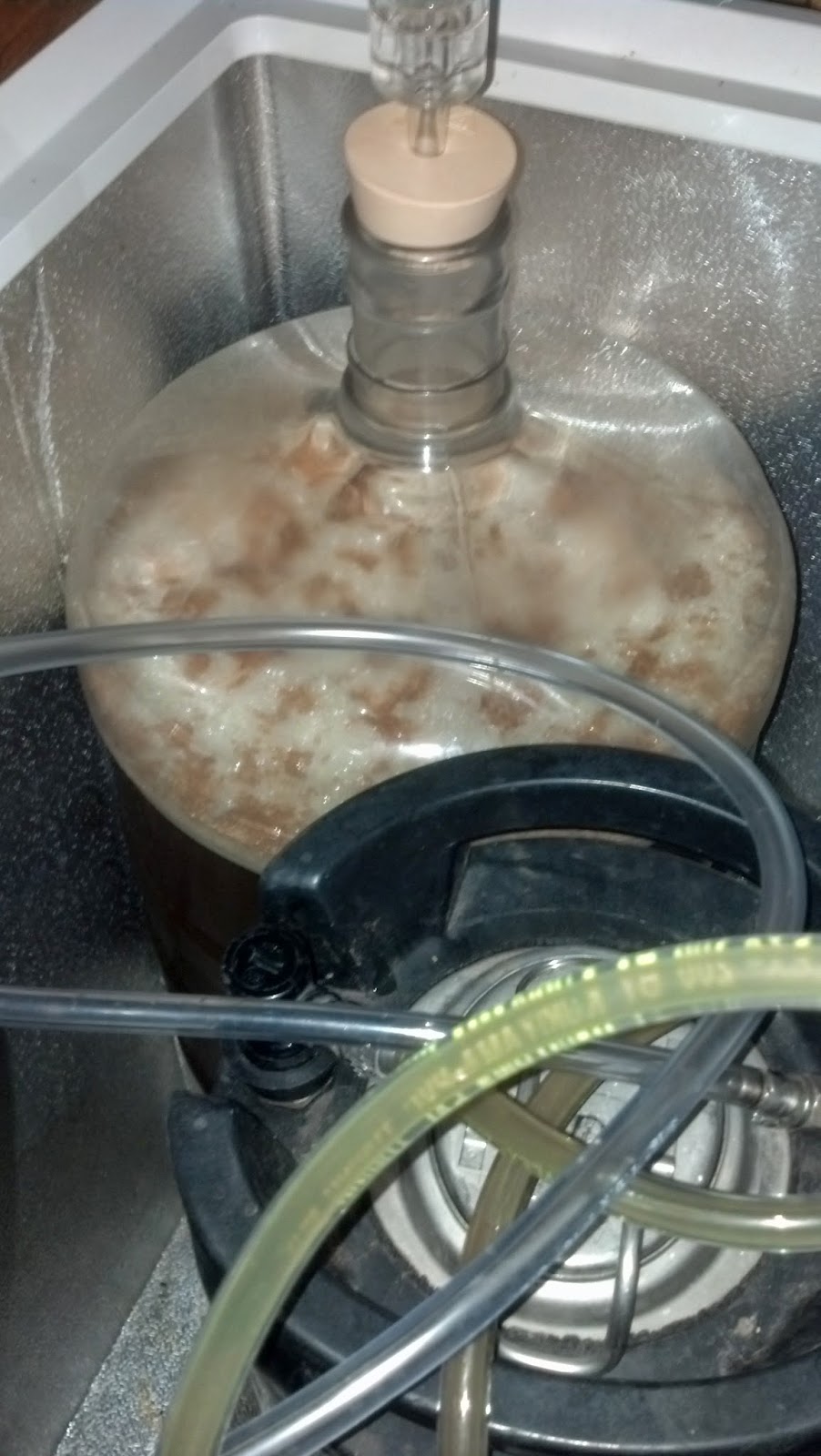 Mash Schedule
60 minute Saccrification rest at 150oF, infused 2 gallons of boiling water to bring temperature to 167oF

Notes:
6/15/14 – Brewed by myself. Mash pH reading was at 4.91, which is 0.3 below where I wanted it. Oddly the boil pH came in at 4.93 at the end, which is where I want it so I’m not really sure. I might need to recalibrate my pH meter. Added 6 grams of gypsum and 3 grams of CaCl to the mash. Ended up with 8.5 gallons of wort so I extended the boil to increase the gravity and lower the volume.

Chilled to 75oF and placed in the chest freezer to bring it down a little bit more. Pitch yeast 6 hours later. Temperature set to 64oF

6/27/14 - Turns out the yeast had stalled and racking it brought the yeast back into suspension and it has continued fermenting. I will continue to blow off pressure from the keg as often as I can. Easily the biggest mess I've created inside doing brewing stuff.