It took me a little longer to get around to reviewing this beer then I would have liked but I think the extra time actually helped it. This might seem counterintuitive for an IPA, but I think the flavors and aromas mellowed out and became more distinctive rather than muddled together. Part of the reason for the delay I was because I had problems getting the keg to carbonate. I’m not sure what the reason for this was, but I finally used the old shake method to infuse CO2. 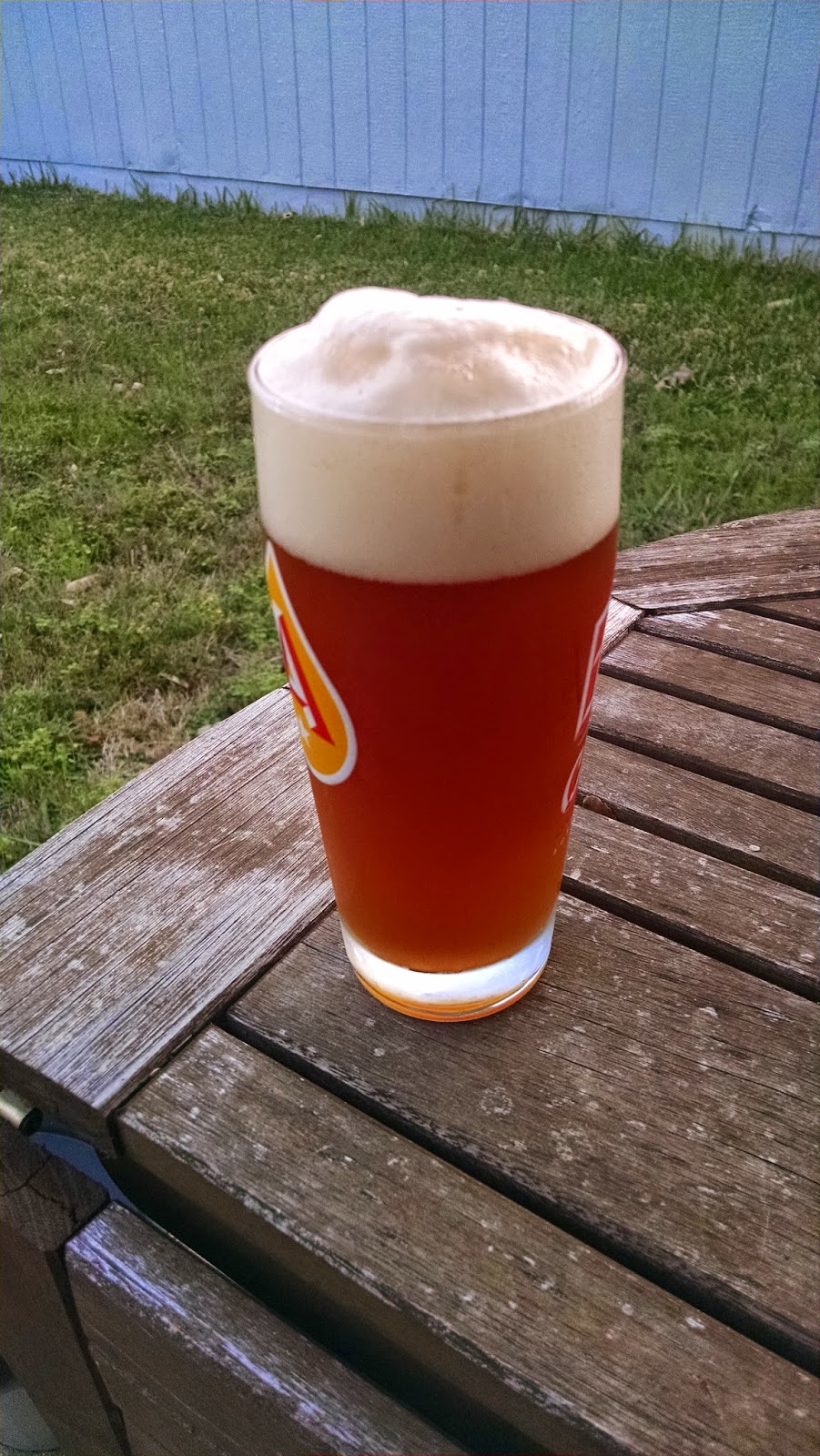 The last time I brewed this beer it did not come out the way I would have liked. It developed a harsh astringent bitterness and was a weird murky brown color. I placed the blame on mash pH. This caused me to force myself to learn about mash chemistry, which I think has overall improved my brewing. I was able to adjust my pH for this beer, but I don’t think I got it low enough. Lowering my pH did help with the color of the beer and I feel it also helped to remove the astringent hop finish (the other problem could have come from poor hop extract). The issue I had this time around came from my yeast not fully attenuating. I don’t think I made a big enough starter after going from the can and I think when I stepped up my starter it was too old. That coupled with an inability to oxygenate didn’t help things for the yeast in a stressful environment.

Never the less I’m much happier with this batch, but feel it could still use some tweaking.

Appearance: It pours a hazy orange-yellow with a fluffy off white head with crazy good retention. The head never really fades from a centimeter thick lacing and clings to the side of the glass. I wouldn’t mind clearing it up a little bit, but really I would have to filter in order to do that. Conan yeast is a notoriously bad flocculater and chill haze from all of the dry hopping isn’t helping anything.

Aroma: Dank hops up front with peach notes peeking through. As it warms up some more citrus aromas come up but it’s still pretty dank. I’m thinking next time I will reduce the amount of Columbus hops and maybe increase the Amarillo hops. I think I will also cut the dry hopping in half. I usually notice the best aroma after the first hopping but then the aroma becomes mixed after the second addition. I was at first disappointed by aroma because it didn’t remind me of Heady, but the more I drank the more I realized that it was similar to Alpine Purehoppiness, which I can’t really complain about.

Flavor: Due to the under attenuation of the yeast there is some residual sweetness that I’m not too fond of but it’s not a cloying sweetness. The flavor is bitterness up front with piney notes and some orange flavor blended and some caramel notes. When I was initially drinking the beer I thought it was too sweet, but the more I drank I started to feel like it was actually fruity hop flavor.

Mouthfeel: Medium carbonation and a full body with a lingering bitter finish. I would have preferred for the beer to be dryer and maybe for the bitterness to be a touch softer. I might dial back the extract some next time around.

Overall: I think one of the things that I’m going to try to do next time for sure is to lower the pH a little bit more. I took a reading of Sierra Nevada Celebration Ale and it came in at 4.44 which is about 0.2 lower then my beer. I added a few drops of lactic acid to a glass and felt like it cleaned it up a bit and brightened up the aroma a little. I think the extra stage of dry hopping also caused the reverse affect then what I was looking for so I think next time I’ll cut that addition out or I’ll split the first dry hop into two additions for better extraction. I’m sure getting full attenuation will probably help as well.
Posted by James at 10:33 AM