I’ve wanted to brew a Saison using Hill Farmstead dregs for a while but I haven’t had the time to drink the only bottle I have and save the dregs. I also generally don’t have any carboys available for long term fermentation. Since I decided that my barrel was ready to bottle I needed to brew something to put in the barrel the next day. Knowing this I decided to take the time to make a starter ahead of time so that when I opened my bottle of Vera Mae I would be ready to capture the dregs. 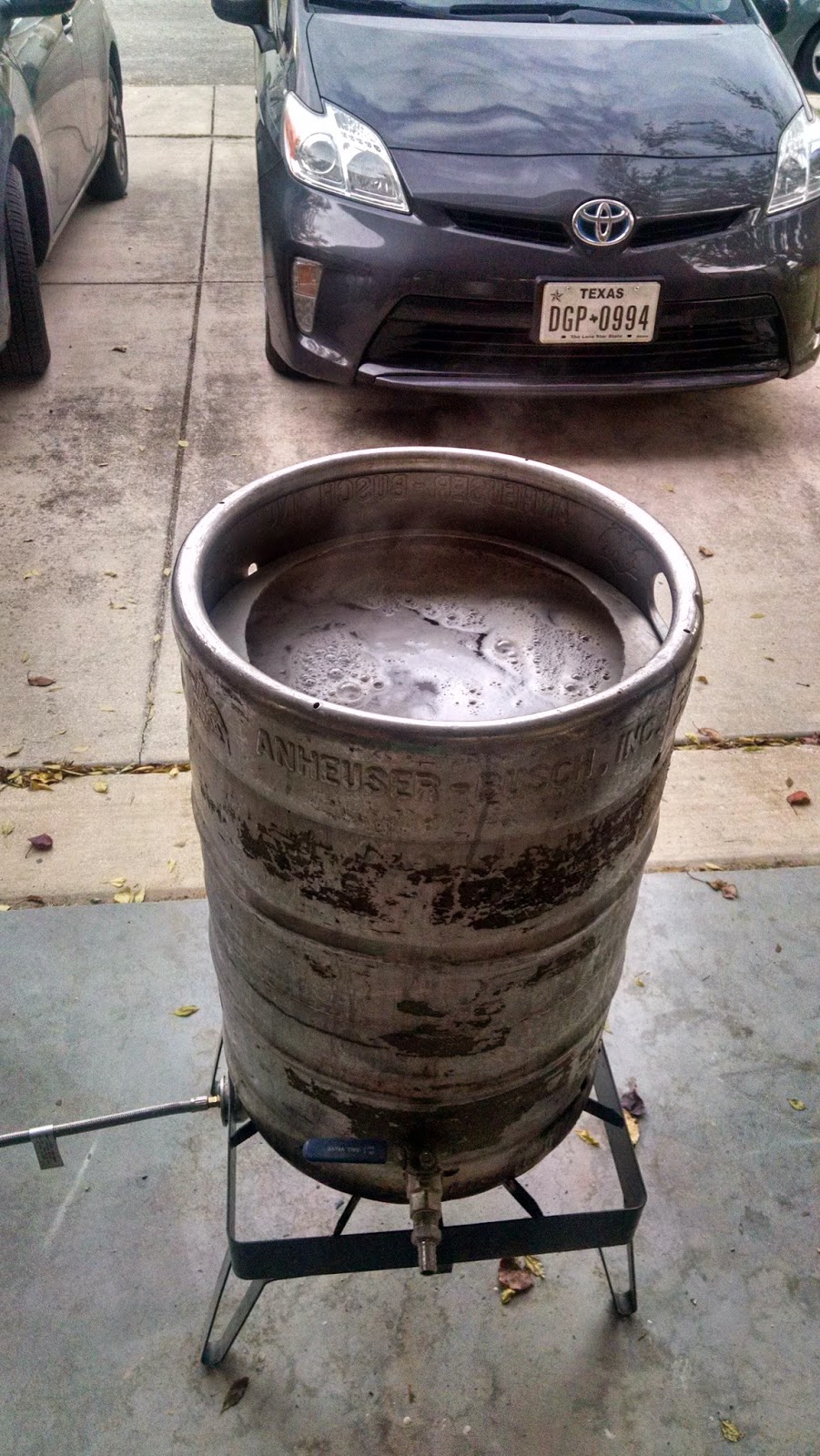 I made a low gravity starter, decanted the bottle into two glasses, but I left about 2 ounces of beer and swirled up everything left into the bottom and dumped it into the starter wort. Unfortunately by the next night there was no sign of activity. I had read that Hill Farmstead uses a different yeast strain for bottle conditioning, but honestly I don’t really believe much of anything that Shaun Hill says when he is not specifically giving information. But just in case to cover myself I opened up a bottle of Allagash Midnight Brett and dumped the dregs into the starter. Still no activity. I went through the brew day as normal, half of the beer went straight into the barrel that I washed the day before with 180F water, and the other half went into the carboy with the non-active starter. My hope was that because the gravity was so low that any growth took place quickly overnight but there wasn’t much fermentation.

The recipe I used was from the first Saison I ever brewed, which was modified from a Mad Fermentationist recipe. It is still is one of the best straight Saisons I’ve brewed. Normally when I brew beers with bacteria and Brett I mash high to provide leftover sugar for the bugs and Brett, but this time I mashed low so that the beer will finish out dry in a quicker amount of time and be slightly tart, rather than full on sour. 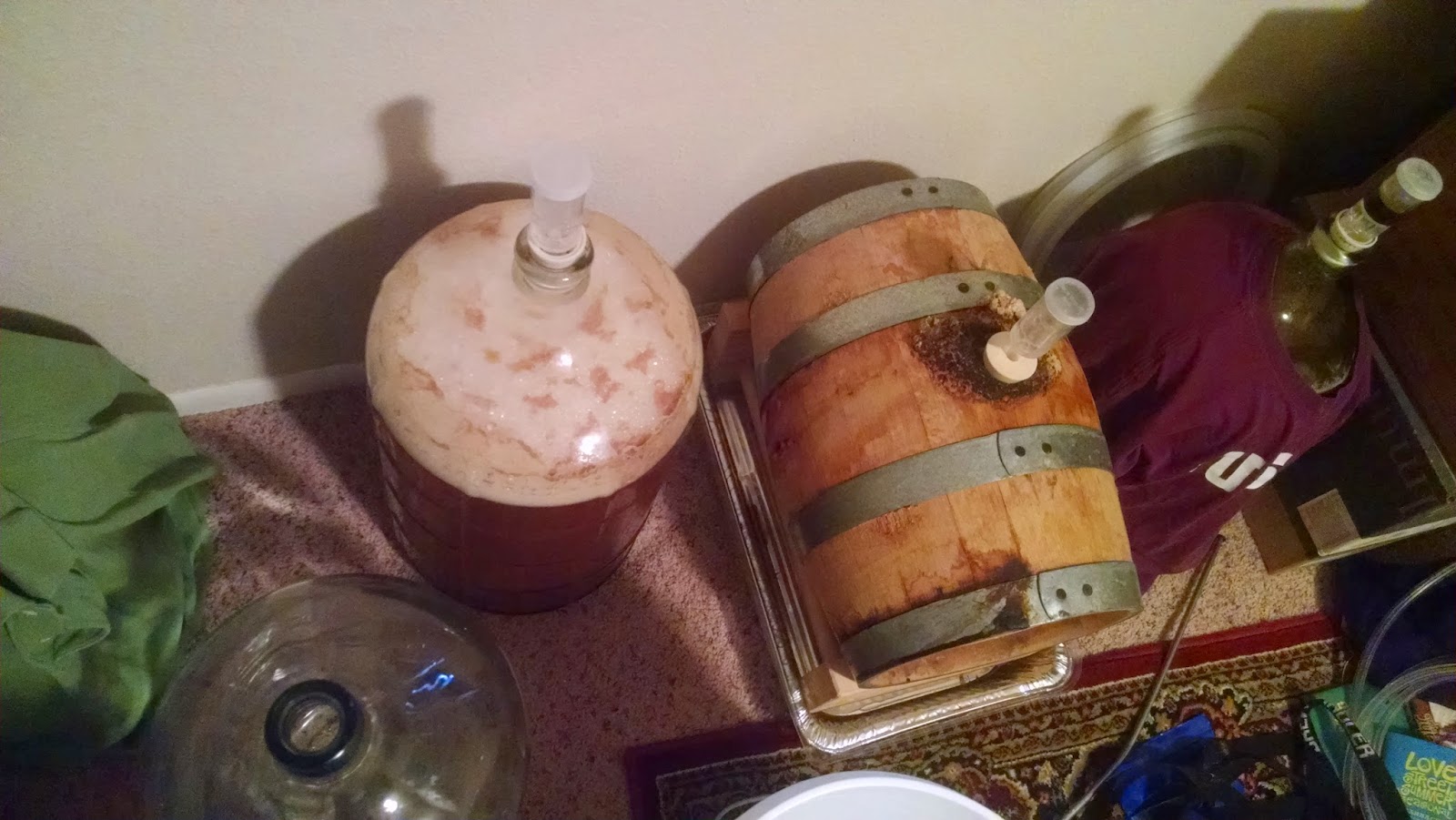 Notes:
11/29/14 – I remember why I don’t drink while brewing. I forgot to add the sugar. Other than that and the stuck kettle screen it was an easy brew day. Attempted to oxygenate using my air stone but it shot off into the carboy again, I’m going to tape it to the hose. Cooled to 65oF and pitched yeast into the carboy, but I’m using the bugs in the barrel to ferment.

11/30/14 – Boiled the sugar separately and added it to the barrel and carboy to boost the gravity.

12/1/14 – Signs of fermentation in the carboy. Both vessels are fermenting in ambient temperature in my beer room, probably 68oF to 72oF.

12/9/14 - Topped up the barrel with an Upland Sour Reserve dreg starter.

12/10/14 - Fermentation in the barrel blew the air lock off and is foaming out of the hole. Looks like I'm going to let it open ferment in my beer room while I'm in Michigan for the next three days.

3/4/15 - Added some fresh krausen from my Bernice clone to hopefully dry the HF version out.