This was a beer that has been nearly 3 years in the making. It started out as a reddish colored Saison that was fermented with Fantôme dregs. Although it was not supposed to, it quickly soured and was placed aside for extended aging. Out of the ten gallons, half of it was ready to have fruit added after only 11 months, but this half took longer to turn the corner. I decided to add plums to the second half after trying Tilquin Quetsche, a lambic refermented with plums. Unfortunately when the beer was ready it was past the season for me to be able to use the plums on the tree in my backyard (also the tree only produced 3 plums so it wouldn’t have worked anyway). 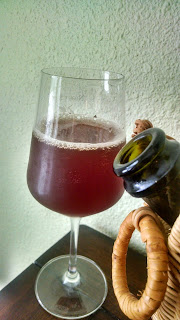 Appearance:  the beer pours a murky reddish-brown with a tan head with low to moderate retention. The reviews that I got from ACCF said the beer poured clear, probably because I left them to sit upright for a month before as opposed to throwing it in my fridge a few days before.

Aroma: I get a general fruitiness in the aroma, mostly berry or stonefruit, but it’s hard to discern plums. A touch of caramel and acidity. Surprisingly I don’t get any acetic acid in the nose, especially with the extended aging. The fact that I left it in its primary fermentation vessel probably helped prevent any oxidation over time. Plums don’t have a distinctive aroma, which didn’t help me in the competition.

Flavor: Lactic acid upfront, a touch of acetic acid, some stone fruit flavor, and a bit of caramel. Just like in the aroma the plum is not really discernible over any general fruitiness. I think most of the flavor in a plum comes from the skin, whereas the meat of the plum is mostly sugar. Since I have tried the beer before and after the addition of the plums I can tell the difference, but if you didn’t know there were plums in it you probably wouldn’t be able to guess.

Mouthfeel: Low carbonation with a surprisingly full body for the dry lingering acidic finish. I would like the carbonation to pick up more and hopefully with time it will. There is more then when I first bottled, but not as high as it should be for the style or my preference. I probably should have added fresh champagne yeast at bottling, but I chose not too because the yeast was still alive and picked up when I added the plums.
Overall: The scores that I received from ACCF averaged 29.5 with most of the negative comments coming from the fact that you couldn’t really tell there was plum in the beer. Since I entered it under fruit lambic it should have been more prominent. I don’t really think there is too much you can do to add plum flavor other than may be more plums. If I were to do another plum sour I would probably go with a pale base beer. I think the darker base, while adding complexity, covers up some of the more subtle plum flavors. I can’t really complain too much since I basically considered these beers a loss and was prepared to dump them. In the end I ended up with a drinkable plum beer and a blackberry beer that helped me receive honorable mention for funkiest of show.
Posted by James at 9:59 AM