It seems like it’s been forever since I brewed, even though it’s only been a few weeks, but compared to the pace I was on it’s been a while. I wanted to brew a grapefruit IPA ever since I tried Ballast Point Sculpin and I wanted rebrew the IPA that I brewed over the winter break ever since I tried it and was disappointed I only had 3 gallons. Why not brew them together? 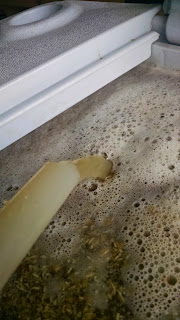 I sent the head brewer at Ballast Point, Yuseff Cherney, an email asking for suggestions or tips for adding grapefruit flavor and aroma. I told him some of the ideas that I had, including using grapefruit juice to lower my mash pH, which would not have allowed me to brew both IPAs at the same time. Luckily for me he was nice enough to reply two hours after I emailed him with some suggestions. He recommended using a very aromatic fruit (buy different varieties and try them out), try to avoid using the white pith since it will provide unwanted bitterness, to add the peal as you would the dry hops in secondary for a few days (depending on the amount of grapefruit you want), and to use hops which simulate grapefruit, such as Cascade.

My plan is to brew the two batches using the same wort and hoping schedule, but to use different hops during my hopback. For the grapefruit IPA I want to use more Cascade for more grapefruit aroma and to add some Simcoe for a little extra pine. The other beer will be the same as my Juicy IPA. I’m still trying to get better at rebrewing beers. Part of the skill of a great brewer is to be able to rebrew past beers and make them taste the same. I can say right now that the beer will taste different. I over shot my mash pH by 0.2 and over shot my target gravity. I hit my pre-boil target, but failed to realize until after I added the sugar that I calculated my target pre-boil gravity with sugar added. I could have added water to the boil to adjust the gravity, but I didn’t remember to add the sugar until the last 15 minutes of the boil and didn’t realize what I was doing (this is why good brewers can rebrew beers).

5/15/15 – Fermentation started in the regular IPA about 8 hours after pitching and it was just beginning in the grapefruit IPA.

5/18/15 – Fermentation slowing, increased temperature to 70oF