I’m trying to catch up on recent brewing endeavors over the summer since I have time now. A few months back (June) I brewed a batch of Berlinerweisse at Freetail’s new production brewery as part of my “reward” for winning Funkiest of Show at ACCF for my blackberry sour. Most people probably wouldn’t consider working in a hot brewery as a reward, but I do get to take home 5 gallons of wort and as a homebrewer, we have a different definition of “reward.” I don’t have the actual recipe from Freetail for Yo Soy Un Berliner, mostly because I forgot what it was, however, instead of writing about that, because a Berliner grain is pretty straight forward, I’m going to write about process and my experience brewing on a large professional system.

In the past I’ve brewed at Freetail before, but it was on their small, cramped, brewpub system. My experience brewing at Freetail 2 was pretty different from the start. First of all, we didn’t need to heat water in the kettle because they have a hot liquor tank on standby with hot water. The biggest difference was the extra space. At the brewpub the brew house is squeezed into a very small space, whereas, at the brewery, there is plenty of open space. There is so much space they have a Frisbee golf set up in the middle of the brewery. While, I do believe the automation is nice (like not having to stir the mash tun), but I do believe that it feels like some of the craft is removed. Obviously I know that’s not the case and at the end of the day I certainly didn’t feel like I didn’t work, but from the homebrew perspective, it seemed almost too easy.

On to the brewing process: it has been discussed almost ad nauseam on online forums the different ways of brewing a Berlinerweisse. As a homebrewer, we have the ability to try different systems to see which will provide us with the best results. On the larger professional scale, they do not have this luxury. Instead, they worry about beer turnaround time and potential infections to their brew house. If a homebrewer experiences an infection it is easy to narrow it down and replace the equipment, but on a larger scale, it’s much more expensive, this also the same for dumping a batch. Freetail chose to use kettle souring for Yo Soy. In the past they barrel aged it to keep any unwanted bugs out of their brewhouse and because it was difficult for them to keep their kettle full for 48 hours. They went with a basic grain bill for a Berliner (essentially 50% wheat and pils malt) and minimal hopping. Starting on Saturday we mashed in and went through a step mash for head stability improvement. We mashed out and sparged into the kettle and then ran the wort through the wort chiller to cool it to 115oF. At that temperature a pure culture of white labs lacto was pitched into the kettle for souring. After 48 hours we returned to be beer to check the pH and determined it was sufficiently sour. The beer was transferred to the whirlpool for holding after being brought up to 185oF to pasteurize. This step was used to prevent bacteria from entering their cold brewing side. That day we went through process of brewing a non-sour version for blending purposes. The only hops we added were about 4 pound of Azacca hops to 30 bbls of wort. Both worts were blended and Wit yeast was used to ferment.

I was able to take home 5 gallons of wort that was blended to ferment along with some wit yeast. Now that I had 5 gallons of a beer that I could buy at the grocery store I decided to use it for fruit experimentation. I couldn’t decide what fruit to use until I looked into my Zymurgy magazine. There was a recipe for a strawberry-rhubarb Berliner. I’ve used rhubarb in the past as frozen rhubarb, but I wanted to use fresh rhubarb this time. In Texas it’s hard to find rhubarb in the summer, so I had to go with canned rhubarb juice and fresh strawberries. After fermentation was complete I added the juice and fresh strawberries to secondary. I was surprised how the rhubarb had no color like I was hoping because I wanted the beer to be pink and I had read that it’s hard to get any strawberry color or aroma to translate to a beer. I went with roughly 3 lbs of rhubarb and 7 pounds of strawberries for about 4.5 gallons of beer. I let the beer ferment on the strawberries for about 3 weeks. I honestly didn’t know how long to leave it on the fruit because my past fruit refermentations involved bacteria and wild yeast, this however, was only Wit yeast. I figured that it would be a quicker fermentation and wouldn’t need to sit for 3 months. After the three weeks I kegged it and carbonated it to 13psi.

Appearance: The beer pours a hazy pink-light red with a light pinkish-white head. I was surprised how much color the beer picked up from the strawberries alone. 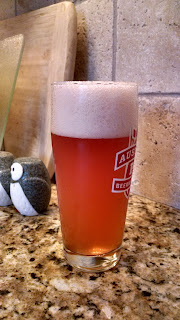 Aroma: Upfront there is a big fresh strawberry aroma with some lactic sourness and a bit of spicy phenols, which are probably from the Wit yeast. I was really pleased with the aroma having heard it was difficult to get strawberry aroma. Maybe the short contact time helped preserve the strawberry aroma.

Flavor: Lactic acidity upfront with a nice berry and grainy finish. The strawberry flavor carries through into the finish. I’m not sure if the rhubarb added any extra tartness like I first thought since my beer was tarter when compared to batch one Yo Soy, but batch two (which is what I used) was more similar to my homebrew, minus the strawberries.

Mouthfeel: Medium body with a dry tart clean finish. The beer is super easy to drink and has been a joy to have on tap during the summer.

Overall: I’m pleased with how the strawberries came out with this beer. Mike at MadFermentationist suggested that he thought the berry flavor and aroma could be from the rhubarb, but it would appear his rhubarb was different from what I used. Who knows, maybe next time I use strawberries I won’t use rhubarb and see what happens. My thoughts are that the berry aroma and flavor was from the strawberries, but it was prominent due to the short contact time with the beer. As time went on the aroma slowly faded in the keg to where there is very little remaining. Maybe that is the key to strawberry sours.
Posted by James at 11:10 AM