Once I felt I got the hang of making sour beers I decided to start adding fruit to them, because I’ve always loved the fruit character I get from a sour beer. I never really liked fruit beers, with the exception of fruited sours; because I always felt when you take away the acidity of the fruit it doesn’t have the same character. Obviously I do still like some fruit beers (Grapefruit Sculpin), but for the most part when I drink a fruit beer I drink a sour. Of course living in Texas it’s difficult to find good fruited sours, which are not coming out of just two breweries in the state. I’ve been experimenting with different fruits, but one of the classic examples is Framboise. I don’t set out to make a specific fruited sour, unless I find some really good fruit and freeze it for later, I usually wait for the beer to tell me what fruit to add. When I tasted the barrel sour that I had going I immediately knew raspberries needed to be added to it. Since I always wanted to make a Framboise it was a win-win. Half of this batch is still sitting on the loquats from the tree in my front yard, but the raspberry sour has been ready for a few weeks. 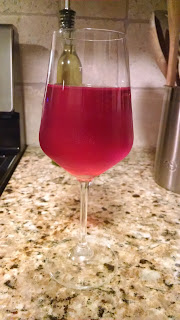 Appearance: Clear bright red, slight chill haze, topped off with an off-white head that quickly disappears. I love the color that the raspberries added to the beer.

Aroma: Lactic acid and raspberries dominate the aroma. There is a touch of funk from my barrel coming through the raspberries, but they over power everything else.

Flavor: Tart raspberry flavor with a lingering lactic acid finish. There is a slight acetic acid character that comes across as a sharp sourness, but it’s minimal. I don’t really get any of the barrel character in the beer’s flavor. The beer is pretty sour; I need to take a pH reading.

Mouthfeel: Light body with an intense sourness and a dry finish. The finish is tart and very dry. Medium carbonation, which I honestly wish was a little higher.

Overall: I’m very pleased with how this beer turned out and I fell that it is one of the best sours I’ve made to date. The only changes I would make would be to cut back on the acidity a bit to make it more drinkable, but raspberries add a lot of acidity and to increase the carbonation, also to aid with its “drinkability.”
Posted by James at 9:24 AM