This beer was two batches in the making. After the first batch was accidently infected I had to dump it because I didn’t want 5 gallons of slightly tart porter. After I dumped it I immediately rebrewed it out of determination to have it the way I want it. This time I sanitized the crap out of my carboy to make sure there were no signs of life. First I filled it with water and added bleach. I let it sit overnight and then dumped it and rinsed it in the morning. After that I filled it up with Starsan to kill anything that might still be alive. I’m happy to report that it was successful. 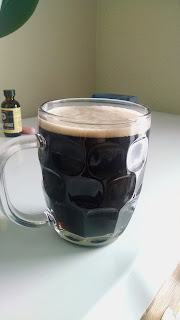 The beer that is in the keg is only a coffee porter, obviously I intended for this to be a coffee lavender porter. I tried to think of ways to add lavender to parts of the beer, but not the whole batch due to fear of it turning soapy. Initially I was going to make a tincture using vodka and lavender, but I was lazy and it would take longer while it extracts the lavender. While I was buying a gift for my father’s birthday, I stumbled upon some lavender extract. I was careful to add the lavender one drop at a time to my glass so that I could find the limit when it became too powerful. I determined 4-5 drops of lavender extract was the right amount for a noticeable lavender aroma without it being soapy and over powering the coffee.

Appearance: Pours a dark black with hints of brownish-red on the sides when the light shines through it, all topped off with a thin tan head, decent head retention. When you hold it up to the light with a thinner glass you can see that there is a slight haze.

Aroma: Upfront you can get the lavender, which comes across as fruitiness, as the beer sits and warms up the coffee become more apparent. There is a strong coffee aroma with some dark chocolate and roasty notes.

Taste: Dark berry flavors with dark chocolate, mocha and coffee flavors. I’m guessing the berry flavors are from the lavender since they are not there without the extract.

Mouthfeel: Medium body with low-medium carbonation and a slightly bitter finish. The bitterness keeps it from becoming sweet. The body is nice, yet still drinkable.

Overall: I think the coffee profile came out really well and I’m pleased with the body. I definitely think going with the lavender extract was a good choice, because I can add it if I want and I can control the amount I add. At low quantities it seems fruity, whereas, if you go over that limit it smells like soap.
Posted by James at 10:24 AM