This beer was a split batch where half was aged on raspberries and the other half on fresh loquats from the tree in my front yard. The raspberry half was ready a while ago; however the loquat part took longer to develop. When I first tried it there was harsh acidity that I figured would eventually fade. My guess is it probably came from the skin of the loquats or perhaps some mysterious native yeast. I just let it sit for a little longer and eventually it was ready to go. 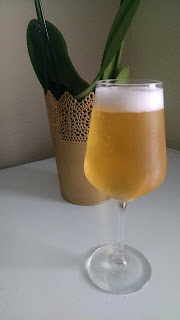 This was my first time working with fruit that I didn’t freeze nor wash. I still think that freezing the fruit is good for extraction, but it will harm any yeast or bacteria that are on the skin of the fruit. It will be interesting to see if the character changes overtime due to possible local yeast being introduced to the beer.

Appearance: Pours a straw yellow with slight haze and a fluffy white head with moderate retention.

Aroma: Citrus acidity with small notes of barrel vanilla and a slightly apricot like aroma. There isn’t much loquat coming through, but they don’t have much aroma to begin with, especially when they’re young.

Flavor: Citrus like lactic acidity that is bright and upfront. The finish has a slightly corny/grainy finish, which in my past experience will eventually fade with time. There is a slight loquat flavor, which comes across as kind of a peach and apricot flavor. I think if they had more time on the tree then the flavor would be more apparent, but I didn’t have time for that and it wasn’t a good crop last year. They more mostly tart as opposed to fruity. Surprisingly there is still some barrel flavor coming through on the back end.

Overall: I’m pleased with the base beer itself, but I would have liked more of a loquat presence. As I stated above I think they needed more time on the tree and I probably could have used a higher percentage in the finished beer. Beyond that the beer is easy to drink, albit maybe a bit too acidic, but no more acidic than a gueuze.
Posted by James at 10:54 AM